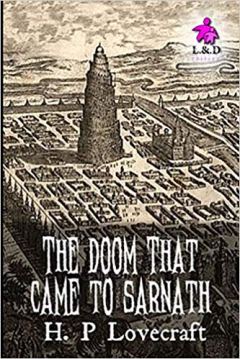 “The Doom That Came to Sarnath,” which I read for the 1920 Club, was my introduction to H. P. Lovecraft, whom I’ve read about for years. Based on this one story, I can’t really say much about Lovecraft’s work, but I intend to read all of the book it came in, The Annotated H. P. Lovecraft: Beyond Arkham.

The short story is written in archaic language that is supposed to remind us, and does, of old stories and legends. It tells how men came to live near the ancient city of Ib, occupied by green, voiceless beings with bulging eyes, and destroyed the city and all its inhabitants, and how its sea green idol disappeared. There the men founded the city of Sarnath.

Later, the city becomes wealthy and so beautiful that people from other cities visit it. But doom was foretold with the original actions of the men, and on the city’s thousandth anniversary . . . . Well, I won’t tell.

I get the impression just from the notes on this annotated edition that Lovecraft invented whole worlds that he returned to in other stories. The story is atmospheric but very short and not particularly scary or disturbing.