Having greatly enjoyed a play based on The Talisman Ring, I thought it was about time I reread the original. So, I pulled out my old, tattered paperback copy (copyrighted 1964) and read it again.

Sylvester Lavenham is dying and wishes to assure that his granddaughter is taken care of. So, he proposes a marriage to his nephew, Sir Tristram Shield. The granddaughter, Eustacie de Vauban, is young, French, and volatile. She agrees to marry Sir Tristram, but having romantic tendencies, she is taken aback by his matter-of-face nature. Changing her mind, she decides to steal away at dead of night to London with the aim of becoming a governess.

Unfortunately, she is taken by smugglers who are trying to escape some excisemen. To her delight, she finds that the leader is her cousin Ludovic Lavenham, famously wanted for murdering a man who refused to return his talisman ring, which he pledged while gaming. During their escape, Ludovic is shot, and Eustacie takes him to a local inn for help.

Of course, Ludovic is not guilty of murder and several characters join forces to prove his innocence. But if you think Ludovic and Eustacie are the romantic lead characters of this novel, you don’t know Heyer. For at the inn, they encounter Sarah Thane, an older young woman with a quick sense of humor.

The Talisman Ring is a typical Heyer romantic comedy, with a complicated, ridiculous plot, one brave but foolhardy hero, a vivacious heroine, and a likable older couple to anchor the romance. It’s lots of fun, as Heyer’s novels usually are.

Sylvester, or the Wicked Uncle

The Marquis of Alverstoke is known for his elegance, athletic skill, and selfishness. He never does anything that causes the least inconvenience for himself. So, when his sister, Lady Buxted, tries to persuade him to give a coming out ball for her daughter Jane, he does not hesitate to refuse. Mrs. Dauntry, his heir’s mother, hears a rumor about the ball and asks Alverstoke to include her daughter Chloë.

Then Miss Merriville comes to call. Frederica Merriville is a distant connection of Alverstoke’s who has come to London hoping to introduce her beautiful sister, Charis, to society with the object of making her a comfortable marriage. Since she has no acquaintance in London, she hopes Alverstoke can help her.

Alverstoke has little interest in helping Frederica until he sees Charis. Then he decides to throw a ball for Jane and Chloë out of maliciousness toward his sister, making it a condition that Lady Buxted sponsor Frederica and Charis. He knows that she will be furious when she meets the beautiful Charis. 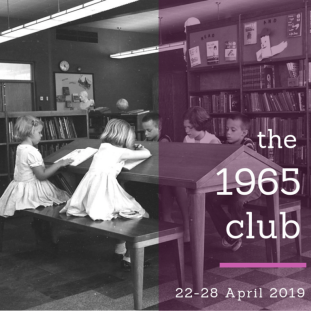 Soon, Alverstoke finds himself embroiled in the affairs of the active Merriville family, which includes two younger boys—Jessamy, a serious sixteen-year-old, and Freddy, a scamp at twelve. After a few weeks and several scrapes, Alverstoke realizes he hasn’t been bored in ages.

Frederica is one of the delightful novels by Georgette Heyer, a writer full of wit and a recognized expert in the period. As is frequently the case with Heyer, I found it funny and touching with a cast of amusing and likable characters.

This was a book I read for the 1965 Club. Here are some previous reviews that also qualify for the club:

So far, the Austen Project, for which current writers rework Jane Austen’s novels within a modern framework, hasn’t worked for me. I have a theory that the readers who like them are reading mostly for plot, whereas I read Austen for her quick but subtle wit and her precision. Let’s face it, although humor is always in style, these days subtlety is not. Still, I thought I’d give Eligible, Curtis Sittenfeld’s reworking of Pride and Prejudice, a try.

Obviously, some of the dilemmas in the original novel are just not workable in today’s society, a problem that foundered Joanna Trollope’s reworking of Sense and Sensibility. Sittenfeld is wise enough to realize this and has made significant changes to the characters and plot.

Liz Bennett is a magazine writer who lives in New York. She and her sister, Jane, a yoga instructor, have returned to their home town, Cincinnati, to help out after Mr. Bennett’s heart attack. Their help is needed even though their three younger sisters, suffering from failure to launch, are still living at home, because they are doing nothing. Mrs. Bennett, a social climber, is too involved in running a charitable event to take her husband to his doctor’s appointments.

Jane is pushing forty, so she started in vitro fertilization before returning home. Then she meets Chip Bingley at a charity event. Jane and Chip immediately become involved, but Liz has formed a negative impression of Chip’s friend, Fitzwilliam Darcy, because of remarks she overhears at a party.

Liz has been involved for years with Jasper, a man she fell in love with in her early 20’s. Jasper claims he has an open marriage, and he has been seeing Liz on the side. When Jasper hears Liz has met Darcy, he hints at some misbehavior of Darcy’s when the two attended Stanford together.

Of the Austen Project novels I’ve read, this is the most successful rewrite, but the bar is fairly low. Although the dialogue is humorous, it’s not the sparkling dialogue of the original. Kitty and Lydia, for example, are almost unbelievably vulgar and poorly behaved. It’s also hard for me to believe that these days a mother would be pushing marriage after Jane and Chip have only had a few dates.

I was fairly well entertained, though, until the emphasis went to the Eligible reality show. Although I’m sure Sittenfeld had fun with her parody, that’s where I felt the novel lost steam.

My friend Deb recommended that I read All Done by Kindness based on a post she read by Furrowed Middlebrow. Such is the power of the web, though, that by the time I looked for it, the few copies available were expensive. I had to borrow hers.

Caper books and movies were popular in the 1950’s and 60’s, and All Done by Kindness fits the description, telling the story of a crime committed with worthy motives, a light-hearted caper with a dash of romance. It begins with a visit by Dr. Sandilands to an elderly patient, Mrs. Hovenden. Mrs. Hovenden’s family has been wealthy, but since the war, Mrs. Hovenden has fallen into hard times. She tells the doctor she is badly in debt for the first time in her life.

Dr. Sandilands offers to lend her the money, even though he can hardly afford it, but Mrs. Hovenden is too proud to take it. Instead, she offers to sell him some boxes of clothes and linen from her attic, including a box of pictures. When the Sandilands family opens the boxes, the results provide Beatrix Sandilands, the doctor’s sharp-tongued daughter, with a great deal to say, for everything is either worthless to begin with or is mouldering away. About the pictures, however, daughter Linda suggests that they consult her knowledgeable fellow librarian, Stephanie du Plessis.

Stephanie thinks that the paintings might be quite valuable, even Old Masters. She does some research that indicates they may have been removed from an Italian villa. Beatrix thinks they are worthless and wants them out of her house. Finally, the family agrees to consult Sir Harry Maximer, an art expert who has the reputation for integrity.

Here, the plot thickens, for Sir Harry recognizes the paintings as Old Masters, but he tells Dr. Sandilands they are only good copies. Why? Because he intends to have them in his own collection.

This is a charming little novel, a delightful book for when you want to read something light. 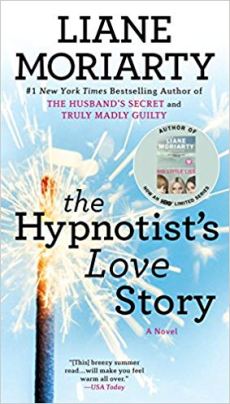 Ellen O’Farrell makes a charming, slightly ditzy heroine. As a professional hypnotherapist, she is experienced in helping her clients detangle their own relationships, but she’s not so good about her own. She hopes to find someone with whom to build a life, and she may have found him in Patrick, a surveyor and single father. Things seem to be going well except for two issues—he still seems to be madly in love with his deceased first wife, Colleen, and he has a stalker, his ex-girlfriend, Saskia.

Oddly, Ellen seems much more concerned about the dead wife than the live ex-girlfriend. Saskia seems rather harmless, even after Ellen discovers she already has her as a client under an assumed name. On the other hand, Patrick mentions Colleen several times a day. Ellen, who has a tendency to over-analyze things, begins wondering if she’s making a mistake.

The Hypnotist’s Love Story is unpredictable. For one thing, it is a long time before you figure out which genre it falls in. Is it a thriller, a comedy, a romance, or chick lit?

I always find Moriarty eminently readable. Her approach is empathetic and her characters usually likable, even the stalkers. This book is lots of fun, and I recommend it for witty light reading. 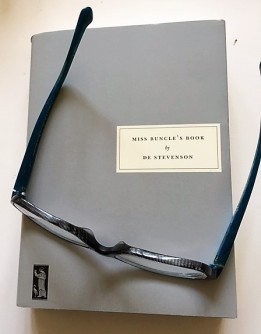 Miss Buncle’s investments have not been providing her an income, so she realizes she must do something. She decides to write a book. She submits it to a publisher, Mr. Abbott, who can’t decide whether it is a sly satire or a story written by a rather simple person. Nevertheless, he likes it and decides to publish it. In particular, he is impressed by the lifelike characters.

Miss Buncle always says she has no imagination and has simply described the people she knows. When the book comes out, all of her neighbors begin to recognize themselves, and many of them are not pleased. But no one knows who the author, John Smith, is. Some of the less likable people in the village decide to find out. The topper is that Miss Buncle has imagined futures for some of her characters, and they start to behave as she predicted.

This is a delightful novel, a fun, light read. It’s the perfect thing to go with a cup of tea on a rainy afternoon. I can see why so many people have loved it. I read it for my Classics Club list.

Sylvester, or the Wicked Uncle

Having read Juliana Gray’s second Emmaline Truelove novel, A Strange Scottish Shore, a few months ago, I decided to read the first. Juliana Gray, by the way, is a pen name for Beatriz Williams, known for her historical romances.

It is February 1906, and Emmaline is finishing up the details for the funeral of her employer, the Duke of Olympia, when the Duchess sends for her. It seems that Maximillian Haywood, the heir to the dukedom, has not been heard from in months. He was off working at the newly discovered archaeological site of the palace of Knossos, but he has not sent in his expected report or responded to any messages. The duchess asks Emmaline to go find him, accompanied by Lord Silverton, a renowned womanizer but apparently also some sort of government agent.

As Emmaline sets off on her journey aboard the duke’s steamship, she finds herself re-evaluating her first impression of Lord Silverton as a simpleton. She also can’t deny he has his charms. Unfortunately, nor can most of the women they meet.

This is a fun adventure story with a bit of a twist—time travel! You’ll like the practical, redoubtable heroine, Emmaline, and the charming Lord Silverton and will probably have a good time along with them on their journey.

At the Water’s Edge

The River of No Return