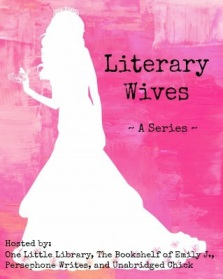 Literary Wives is a virtual book club–a group of bloggers who are wives. Every other month we read a book about wives and incorporate the answers to a question into our reviews, following by a discussion:

What does this book say about wives or about the experience of being a wife?

You can participate by reading along with us and posting your comments or links to your reviews on any of our blogs or our new Facebook page.

October 2013: Ahab’s Wife: or, The Star-Gazer by Sena Jeter Naslund
December 2013:  The Wife, the Maid, and the Mistress by Ariel Lawhon
February 2014: The Inquisitor’s Wife by Jeanne Kalogridis
April 2014: The Zookeeper’s Wife by Diane Ackerman
June 2014: The Crane Wife by Patrick Ness
August 2014: The World’s Wife by Carol Ann Duffy
October 2014: Wife 22 by Melanie Gideon
December 2014: The Shoemaker’s Wife by Adriana Trigiani
February 2015: The Last Wife of Henry VIII by Carolly Erickson
April 2015: The Bishop’s Wife by Mette Ivie Harrison
June 2015: My Father’s Wives by Mike Greenberg
August 2015: The Astronaut Wives Club by Melanie Benjamin
October 2015: The Silent Wife by A.S.A. Harrison
December 2015: The Kitchen God’s Wife by Amy Tan
February 2016: A Circle of Wives by Alice LaPlante
April 2016: The Happy Marriage by Tahar Ben Jelloun
June 2016: The Disobedient Wife by Annika Milisic-Stanley
August 2016: How to Be a Good Wife by Emma Chapman
October 2016: American Housewife by Helen Ellis
December 2016: Mrs. Hemingway by Naomi Wood
February 2017: The Wife by Meg Wolitzer
April 2017: Z: A Novel of Zelda Fitzgerald by Theresa Fowler
June 2017: The Awakening by Kate Chopin
August 2017: On Beauty by Zadie Smith
October 2017: Dept. of Speculation by Jenny Offill
December 2017: A Lady and Her Husband by Amber Reeves
February 2018: The Blazing World by Siri Hustvedt
April 2018: The Headmaster’s Wife by Thomas Christopher Green
June 2018: Stay With Me by Ayòbámi Adébáyò
August 2018: First Love by Gwendolyn Riley
October 2018: An American Marriage by Tayari Jones
December 2018: The Stars Are Fire by Anita Shreve
February 2019: They Were Sisters by Dorothy Whipple
April 2019: Wait for Me, Jack by Addison Jones
June 2019:  A Separation by Katie Kitamura
August 2019: Ties by Domenico Starnone
October 2019: Happenstance by Carol Shields
December 2019: The Home-Maker by Dorothy Canfield Fisher
March 2020: War of the Wives by Tamar Cohen
June 2020: The Dutch House by Ann Patchett
September 2020: Alternate Side by Anna Quindlen
December 2020: The Age of Innocence by Edith Wharton
March 2021: Every Note Played by Lisa Genova
June 2021: Greenwood by Michael Christie
September 2021: The Amateur Marriage by Anne Tyler
December 2021: The Summer Wives by Beatriz Williams
March 2022: I’m Fine and Neither Are You by Camille Pagan

Ariel of One Little Library

Ariel is the Acquisitions Editor for Teaching Methods at a Southern California education publisher. She likes heroines full of gumption and conflicts fraught with ethical dilemmas. Her favorite book is and always will be Jane Eyre. In her spare time, you can find Ariel doing yoga at the beach or reading with a glass of wine.

Cynthia of I Love Days

Cynthia is a former technical writer, business analyst, Peace Corps Volunteer, and teacher from Texas who traded that life in for two suitcases and a string of foreign addresses. Her husband calls this slow travel, and they’re starting it off with a year in Mexico. Cynthia loves sightseeing, but she’s secretly thrilled the slow schedule allows breaks from 12,000-step days for her favorite activity, reading.

Emily of The Bookshelf of Emily J. (taking a break)

Emily recently graduated with a Ph.D. and is visiting assistant professor of English at a research university near her home in Salt Lake City. She has worked as an editor and composition instructor, and she is working on teaching and academic research in technical and professional communication and women’s history. She is the mother of two little girls and loves chocolate and ice cream. The thing she wants most right now is a day in bed with a good book, preferably fiction.

Eva spent a lifetime talking to people who weren’t listening about books and reading until she realized that she could blog about them with people who did care. She lives on the West Coast of Canada where she continues to learn to love Canadian literature and talk about the weather. She’s most happy curled up in her reading chair, a cup of tea balanced on the armrest and her German shepherd lying at her feet. Eva has no patience for heroines who fit their lives around men.

Lynn of Smoke and Mirrors

Lynn is an avid reader, former Borders bookseller, and now blogger of books and reviews! She is mother to 3 sons, grandmother of 11 grandchildren, companion to one beautiful and “purr”fect gray kitty, Smokie, as well as 4 other sweet felines… Most importantly, she can count one of the kindest, most caring, and complex men she’s ever known as her full-time partner and husband.

Naomi of Consumed By Ink

Once upon a time, Naomi worked as a biologist, math tutor, and early childhood educator. Since then, she has been happily reading bedtime stories to three eager listeners, and hopes this will never change. She loves traveling around the Canadian Maritimes with her family, visiting the used book stores and bakeries.

And me, Kay of whatmeread.

Kay is a long-time professional technical writer (now retired—yippee!) who has taught composition and technical-writing courses at the college level. She loves reading all kinds of books. When she recently got an iPad and spent some hours playing games, her husband thought she’d undergone a personality change. But soon she was back to reading. She is the secret author of three (sadly unpublished) trashy romance novels.