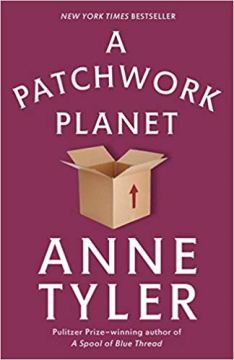 Anne Tyler’s books have been around for years, and some of them have been very popular, but for some reason, I never read any until just a couple of years ago. Now, I have read a few and wonder what I was waiting for. Her Baltimore settings and her quirky characters make for an enjoyable time reading.

In A Patchwork Planet, Barnaby Gaitlin is on his way by train from Baltimore to Philadelphia to see his daughter when he becomes fascinated by an incident. A man goes up and down the platform looking for someone who is going to Philadelphia, but he does not ask scruffy-looking Barnaby. He finally finds a middle-aged woman who agrees to take a package containing her passport to the man’s daughter in the Philadelphia station.

This event awakens in Barnaby both curiosity and a sort of protectiveness toward the woman. He watches her during the trip to see if she opens up the package to make sure it is a passport and not something more sinister or dangerous. She does not. He follows her to see her hand it over.

Barnaby is on the surface a tough, lower-class guy, but we find as we get to know him that he is still rebelling, at 30, against his wealthy, status-conscious parents. He is not ambitious, but he is kind-hearted and loves his job for Rent-a-Back, where he does chores and runs errands for mostly elderly clients. But he is a disappointment to his parents, especially to his mother, who can’t forgive him for incidents in his juvenile delinquent past. This past involved breaking into houses and stealing, but while his friends took liquor and money, Barnaby looked at family albums and stole curios. Unfortunately, he was the only one caught.

Barnaby takes another train trip with the woman, Sophia, and engages her in conversation, during which his friendliness wins her over. She contacts Rent-a-Back to have him help out her aunt. Soon, they begin dating.

Under Sophia’s influence, Barnaby begins to make strides toward growing up: to be more reliable at work, to make sure his daughter gets attention, to pay back his parents. But a crisis comes when Sophia’s aunt accuses him of stealing her nest egg.

A Patchwork Planet isn’t one of Tyler’s better known books, but I really enjoyed it, principally because of Barnaby’s engaging personality. This book is lots of fun.