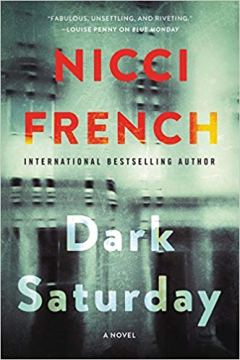 When I went looking in the library for something suitable for the end of October, I found one of Nicci French’s dark and disturbing mysteries featuring psychotherapist Frieda Klein. I have read all but the book before this one in this series. I missed the last book but did not feel that it threw me off in reading this one.

The Frieda Klein series began with a dangerous psychopath escaping justice by killing his twin brother. Only Frieda believes he is alive, and she knows this because he has been both harassing and protecting her. So, this ongoing plot is always mixed with one that is solved in each book.

Frieda is hired by a mysterious man named Levin, whose role I don’t quite understand, to look into the case of Hannah Docherty. Fifteen years ago, she was permanently hospitalized after being found guilty of the murders of her entire family.

In Frieda’s initial examination of the case files, she finds some discrepancies that are not explained by the theory of the case. After she goes to visit Hannah in the mental hospital, she begins to entertain the possibility that Hannah did not commit the crime.

During the course of the investigation, she finds an eccentric crime blogger who stole all of the Docherty’s possessions after they were thrown out. Frieda takes these possessions from her and shortly thereafter the woman is killed in a fire that burns down her house. Now, Frieda is sure that Hannah is not the murderer.

Frieda is an enigmatic character whom I find fascinating, and the other characters in the book are convincing. Although some of the books in this series are not really thrillers (some are), they never fail to send a chill down my spine.