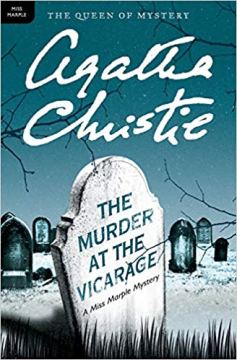 I decided to reread Murder at the Vicarage for the 1930 Club, but it also applies to Readers Imbibing Peril. It is the first Miss Marple book, and for much of it she seems like a minor character.

The novel is narrated by Len Clement, the vicar of St. Mary Meade. He is called away one evening by what proves to be a false call for help. He arrives home late for a meeting with Mr. Protheroe, a wealthy man who is disliked by many. In his study he finds Protheroe dead, shot in the head.

Of course, there are lots of suspects and red herrings. Mr. Hawes, the curate, is behaving oddly. Mrs. Protheroe had just decided to part from Lawrence Redding, who is in love with her. Lettice Protheroe has inconsistencies in her alibi. Rumor reports that a local poacher has a grudge. A team exploring the local barrow seems to be up to something besides archaeology.

No sooner does Inspector Slack appear on the scene when first Lawrence Redding then Anne Protheroe make confessions of guilt. Miss Marple lives next to the vicarage so has some testimony to offer about its comings and goings. And she also has some interesting ideas about who may be guilty.