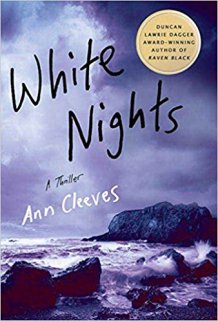 In the small settlement of Biddista, isolated from the rest of Mainland Island of the Shetlands, an art opening is taking place. Detective Jimmy Perez is surprised by how few people attend. It is summertime, the white nights, and lots of tourists are on the island. His friend Fran is showing her work, but so is the famous artist Bella Sinclair. Further, Bella’s even more famous nephew, Roddy Sinclair, is performing.

In the gallery, there is a small scene. A man falls to his knees and begins weeping. When Jimmy takes him to the kitchen, he says he can’t remember anything. He has no identifying information on him. When Jimmy leaves the room to see if he brought a bag, he disappears.

The next morning, Kenny Thomson, a nearby crofter, finds the body of a man hanging in his fish house. Bizarrely, the body is wearing a mask. Jimmy soon identifies the body as the man he spoke to the night before. No one knows who he is, however. Jimmy discovers that a masked man was handing out flyers in Lerwick stating that the gallery show was cancelled, thus explaining the low attendance.

Why would this man have pulled such a malicious trick on Fran and Bella? Both women claim not to recognize him. In the meantime, Inspector Taylor is coming from the mainland to take over the case.

Almost immediately, I felt that this case was connected to the disappearance long ago of Kenny’s brother Laurence. I wondered, for example, if the dead man could be Laurence returned. Rumor had it that Bella rejected him all those years back, and that’s why he left.

But Cleeves completely had me fooled about the identity of the murderer. This is a really clever mystery, and I enjoyed it.