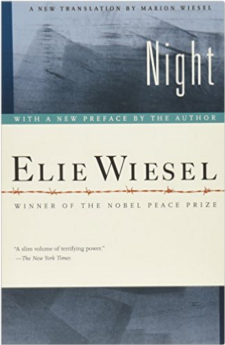 Here is my review of my Classics Club spin choice for Spin #11!

Night is Elie Wiesel’s spare and harrowing description of his and his father’s time spent in a series of concentration camps during World War II. He begins his story in 1944, where in the town of Sighet, Transylvania, the war did not seem to have touched the Jewish population. They had heard of problems in Budapest, but they knew nothing of the larger Nazi activities aimed at their people.

The first indications came from Moishe the Beadle, a man with whom Elie has been studying the Kabbalah. As a foreign Jew, Moishe was deported to a work camp. But he came back to tell everyone that all of the deportees were driven to Poland where they were forced to dig trenches and then shot. Moishe was wounded but managed to get away and returned to warn them. No one believed him, however. They naively refused to believe the Germans could behave that way. Elie and his family could have gotten a visa out of the country, even at that late date, but they stayed.

Next, all the Jews were rounded up into two ghettos, and not much longer after that, they were shipped out to Auschwitz. Once the women and girls were separated from the men and boys at the camp, Wiesel never saw his mother or sister again. He was 15 and probably only lived because an inmate told him to say he was 18.

At only 120 pages, this is a short but affecting description of his experiences in the camps. It does not dwell overly much on the horrific conditions, but we understand how terrible it was. The book also deals with Wiesel’s spiritual landscape, as he changed from a devout boy to a man who no longer believes.

This book is not a testament to human fortitude, for Wiesel makes it clear that humans under evil conditions behave badly. Instead, it is an important documentation of a black time in human history.

The Narrow Road to the Deep North