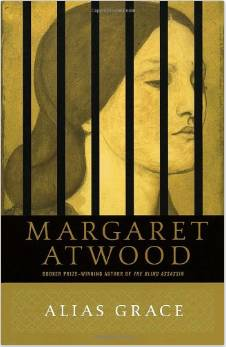 Best Book of the Week!
Most of what I have read by Margaret Atwood has been futuristic and dystopian, so I was quite surprised to find that Alias Grace is an apparently straightforward historical novel. But then, nothing with Atwood is exactly straightforward.

The novel is based on a notorious Canadian murder, in which two servants were found guilty of murdering their master and his paramour housekeeper. The man was hanged, but there continued to be debate about the extent of the guilt of the woman, Grace Marks.

The novel begins some years after the event, when Dr. Simon Jordan, studying new discoveries in the field of mental illness, is hired by a group trying to gain Grace a pardon. Grace has always claimed she cannot remember the crimes, and he hopes to revive her memory. He begins in a way meant to slyly nudge a modern sense of humor, by bringing her an apple followed by a series of root vegetables he hopes will remind her of a cellar, where the bodies were discovered.

Grace, who was very young at the time of the crime, eventually tells him what she can remember, beginning with her early life. She relates her story in a simple way, conveying the persona of a proper young girl.

Dr. Jordan appears as if he is going to be the hero of this novel, but he has his own obsessions and difficulties.

As Grace tells her story, we are drawn slowly in, waiting to learn what really happened. This novel is rich in detail and beautifully written, but it is also slyly humorous and dark.