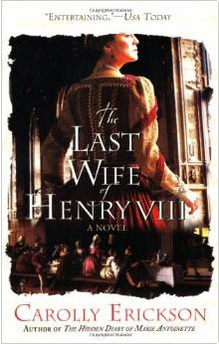 Again, we have a group book review with Literary Wives, where a group of bloggers get together and review the same book about wives on the same day. If you have read this month’s book and would like to participate, leave comments on any of our blogs. Be sure to read the reviews and comments of the other wives!

In considering The Last Wife of Henry VIII, I come smack up against the issue I’ve mentioned in the reviews of several historical novels based on the lives of actual people. That is, how an author can make the subject interesting while staying faithful to the events of the person’s life and to the person’s character.

In this novel, Erickson has a fairly clean slate to work with, because Catherine Parr’s life has not been covered as exhaustively as that of other Tudors. Yet it is one thing in historical fiction to invent the details of ordinary life and another to present readers with questionable events. The most obvious of these is to have Parr’s love affair with Thomas Seymour begin while she was still married to John Neville, when to all indications it began after Neville’s death, when she was left a relatively wealthy widow. And, might I add, the unlikelihood that they continued their physical relationship (if they had one) while she was married to Henry VIII. Not in that court and atmosphere, with that history, I’m guessing.

But this is aside from the point that with all this inventing, Erickson still fails to make Catherine Parr an interesting character or her story compelling—despite the fact that it probably was compelling. The actual Catherine was much more capable and influential than Erickson’s character, in fact.

What does this book say about wives or the experience of being a wife?

First, for the Tudors wives were bargaining chips. The novel depicts Catherine as taking control of her own fate in some of her marriages, but only within limits. That is, in both instances if she hadn’t had another suitor, she would have had to marry the person chosen for her. Within the marriages, the limits to her spheres of action are chosen by her husband unless, as in her marriage to Seymour, she has her own money, which gives her leverage. In three of her marriages, her husband’s activities or relations with her husband’s relatives make her position insecure, so much so in her first marriage that she is left a poor and unprotected widow, at least according to Erickson. I would submit that in actuality, what left her insecure after the death of Henry VIII was more likely her marriage to Thomas Seymour than anything else.

In what way does this woman define “wife”—or in what way is she defined by wife?

Catherine usually tries to do her duty by her husband, whether she loves him or not. The exception is her affair with Thomas Seymour while she was married to John Neville (which I don’t believe actually happened). In the terms of the novel, this is probably supposed to make it more romantic (it doesn’t), but it makes her character less consistent. I would say that for Parr, a wife is dutiful, affectionate, and tries to do the right thing. Her marriage to Henry VIII also shows her as compassionate, capable, and politically astute. Her marriage to Thomas Seymour, on the other hand, shows her as fatuous and besotted, unfortunately the reputation that has survived her. If I can sneak in a comment about stepmothers here, I believe her actual relationship with Henry’s children was much warmer than depicted in the novel.

Bring Up the Bodies