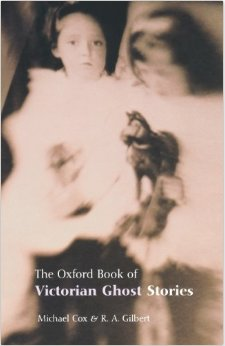 In honor of Halloween, I decided to read this collection of 35 ghost stories from Victorian times, when they were very popular. This collection contains stories by well-known writers of the time, such as Charles Dickens, Mary Elizabeth Braddon, Wilkie Collins, and Rudyard Kipling, as well as those by other less-known writers.

First, I’ll comment that modern audiences probably won’t find them very scary. But I’m not so sure this has anything to do with the period or the ability of the writers. I think it’s very difficult to handle genre fiction successfully in a short story. Short stories seem to me to be more suited for literary fiction somehow. A few years ago, for example, I read a collection of mystery short stories but felt that the form didn’t allow much space to really develop an interesting atmosphere or characters. It merely allowed the author to pose a puzzle and a solution.

The Victorian ghost stories seem to observe a few conventions. Unlike the gothic stories from the preceding years, Victorian ghost stories are more homey and less likely to include oddities, fantastic events, or exotic settings. Many of them are presented as a person telling a story to one or more other people, often as an evening entertainment before the fire. Almost all of them involve haunted houses, which often seem to be leased to unwary renters at a suspiciously low price. (But I shouldn’t mock. I actually have a friend who found himself in precisely this situation.) Another common theme is a haunted object. In most of the stories, the worst thing that happens is that someone sees a ghost, although there are a couple that are a little more gruesome.

I found the story-telling approach a little tiresome after awhile and was refreshed by the ebulliant characters writing the letters in the epistolary story “The Truth, the Whole Truth, and Nothing but the Truth,” by Rhoda Broughton. “The Romance of Old Clothes” by Henry James and a few others also stood out. The collection even includes one vampire tale.

If you are looking for some chilling reading, you’re not really going to find it here. (Although I’ll suggest that any of these stories may be more successful if read out loud, preferably on a dark and stormy Halloween night.) However, if you are interested in the genre or the time period, you’ll probably find the collection worth dipping into.