Midhat Kamal is the son of a wealthy textile merchant from Nablus in Palestine. His father more or less deserted him with his second marriage after his mother’s death and lives in Cairo, visiting a few times a year. When Midhat is 19, in 1914, his father decides he should study medicine in France and arranges for him to stay with a French professor of anthropology, Frédéric Molineu, in Montpellier.

Unfortunately, Midhat falls in love with Molineu’s daughter, Jeanette. Although his feelings seem to be returned, Midhat discovers a betrayal that makes him flee Montpellier for Paris. In Paris, he works on developing a reputation as a bon vivant and womanizer, only peripherally involved in his friends’ discussions about Arab nationalism.

Nonetheless, returning to Nablus, he almost immediately adopts the life his father demands, learning how to run the Nablus store in preparation for moving to Cairo and finding a wife. Events, however, will turn the course of his life again.

Although the novel covers the beginning of the fight for Arab nationalism against the British and French, which sounds interesting, as well as the time period of World War I, Hammad is hampered by her choice of main character, for Midhat is so self-absorbed through most of this book that he hardly seems to know what’s going on around him. This detachment affects the readers’ relationship to the novel, making me feel detached from its actions. Further, although there is a weak link between the first part of the book and the rest, there seemed to be little connection except that Midhat’s self-absorption is related to this character he has created for himself, the Parisian. I found the love affair unconvincing in any case.

For a historical novel set in an interesting time and place, there is very little sense of that time or place. So, not a big recommendation from me for this novel, which I read for my Walter Scott project. It is well written, but although important things happen in the novel, the action is at such a remove that it feels as if nothing is happening, if that makes any sense.

The Map of Love

The Forty Days of Musa Dagh 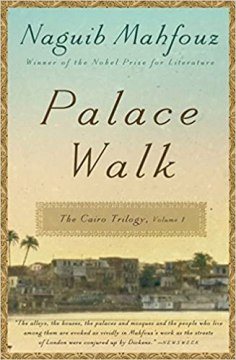 I experienced quite a bit of culture shock reading Palace Walk, which made me realize that although I have read books set in Egypt about Egyptians, all but one were written by Western writers, and that one, Map of Love, was much more modern. Palace Walk is about Ahmad Abd al-Jawad and his family, and I believe it’s Mahfouz’s own family thinly disguised.

The novel is the first of three in Mahfouz’s Cairo Trilogy. It begins with al-Jawad’s wife, Amira, getting up at midnight to help her husband get ready for bed after his usual night of carousing and womanizing. Although her husband is a good friend and convivial participant in nightly drinking bouts, at home he is an angry tyrant to his wife and children. I found it interesting that although he has the reputation of a righteous and observant man, no one seems to think his drinking and womanizing make him a hypocrite.

Mahfouz was a writer in the Realism school and as such explores both the good and bad facets of his characters’ personalities (although it sometimes seems like Realists concentrate on the gritty). The novel develops slowly, introducing us to al-Jawad, Amina, and his five children—Yasin, a government clerk who immerses himself in sensuality like his father but with less control; Fahmy, a university student who is serious and ardent; Khadiya, the older, sharp-tongued daughter; Aisha, the younger, beautiful daughter; and Kamal, a schoolboy who may be Mahfouz’s alter ego.

Beginning in 1917 near the end of World War I, the novel at first focuses on purely family concerns such as Fahmy’s desire to be affianced to Maryam, the neighbor girl; Aisha’s receipt of an offer of marriage before Khadiya’s, when their father has decreed that the younger girl will not be married before the older; and Yasin’s mother getting married again, which Yasin thinks is obscene, since she has been married several times. In these domestic incidents, the family constantly faces their father’s anger and intransigence. Mahfouz frequently tells us of his good points although they are not often demonstrated. In fact, there is a lot of explanation going on about the thinking and characters of the family members, some of it quite repetitive.

As the novel develops, external events become more important, especially the Arab Revolution of 1919 against the protectorate of the British. This more outward view makes the second half of the novel move along more quickly.

Certainly, al-Jawad’s actions toward his wife and children are shocking, and Mahfouz makes clear that he is stricter than most others by the comments of al-Jawad’s friends. Yet, it is also clear that no one would interfere in his treatment of his family, since it is his right to behave as he wishes. As an example of some of the things he does, Amina, who has only left the house a few times in 23 years of marriage, takes the opportunity of her husband’s absence on a business trip to visit a nearby mosque. Because Kamal guides her out of her route so that he can visit a pastry shop, she becomes disoriented and faint and is hit by a car. After she recovers, her husband banishes her from the house for leaving it without asking him (and believe me, he would have said no).

His son Yasin, the leaf not falling far from the tree, thinks later in the book when his wife is not happy with his nights out that it is the husband’s right to do anything he wants and the wife’s to obey. Nice.

The trilogy is supposed to be about the effect the father’s tyranny has on his family. I read it for the 1956 Club, and I suppose I will go ahead and read the other two novels. It certainly provides an intimate look into family life and customs in early 20th century Egypt.

The Map of Love