To Bed with Grand Music opens with Deborah Robertson in bed with her husband Graham swearing perfect fidelity before his deployment to Cairo during World War II. Graham more honestly doesn’t promise that but says he won’t sleep with anyone that matters. At first, Deborah contents herself at home, but when, in her boredom, she begins snapping at her little son, Timmy, her mother suggests she get a job.

Her mother is thinking about a job nearby in Winchester, but Deborah makes arrangements to visit a friend in London, Madeleine, and see about a job there. Intending to go home on the evening train, she ends up getting drunk and spending the night with a man.

Shocked at herself, Deborah is determined to stay home, but she has a talent for convincing herself that what she wants to do is right, so it’s not too long before she turns down a job in Winchester only to take a lower-paying one in London. From there, she begins a career of connecting with men of increasingly higher rank.

Deborah is definitely an antihero. She starts out selfish and nervous and becomes deceitful, amoral, and avaricious as she goes on. Her faint motherly instincts become almost nonexistent. This is an insightful, sardonic character study of a particular type of woman.

A Fugue in Time 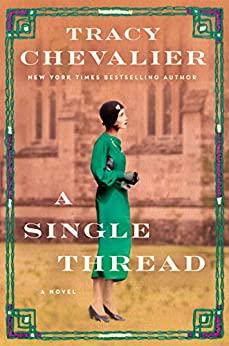 Violet Speedwell’s fiancé was killed during the First World War, and twenty years later she’s one of the many single women in Winchester. Even though there are so many, they haven’t gained any respect, it seems. Violet has managed to free herself from her difficult mother by arranging a work transfer from Southampton to Winchester, but so far she hasn’t made much of a life for herself.

When she stumbles upon a private ceremony in Winchester Cathedral, she gets interested in the work of the broderers, a group of women who embroider kneelers and seat cushions for the cathedral. She joins the group and soon has made friends with an office worker because of it. Although Violet is at first hyper aware of other people’s attitudes, through her new friendships she begins to become more accepting and take more risks.

I was reasonably interested in Violet’s journey, but this novel seemed unfocused to me. For example, although people are inconsistent, Violet’s extreme awareness of what other people think does not seem to mesh well with a woman who occasionally goes out to pick up men for sex. This characteristic seems much too modern for the woman Violet was at the beginning of the book, although the affair at the end is more plausible. Also, as to the two preoccupations of the novel, embroidery and bell ringing, it was as though Chevalier couldn’t decide which to write about. She did a better job at bell ringing than did Dorothy Sayers in The Nine Tailors, which I found incomprehensible (not the mystery, just the information about the bells), but I think that perhaps two focuses is one too many.

Maybe to Chevalier the cathedral said cushions and bells to her, but she wasn’t really writing about the cathedral. In any case, I’m trying to poorly express that I found this novel mildly interesting but also unsatisfying.

The Summer before the War