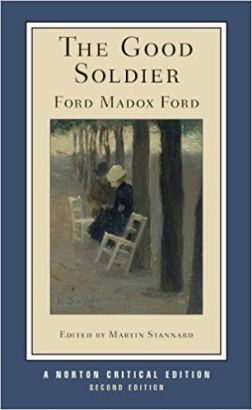 The Good Soldier is considered Ford Madox Ford’s greatest novel. His earlier work was more Edwardian realist, but this novel has several characteristics of modernism, including an unreliable narrator, an interest in characters’ psychological underpinnings, and a more liberated female character.

The narrator of the novel, set before World War I, is John Dowell, a wealthy but incredibly dense American. He is not unreliable because he is lying or misrepresenting what has happened but simply because he is almost willfully blind to it. At the beginning of the novel, he informs us that the Ashburnhams were his wonderful, close friends for nine years, decent people, good people. Yet, at almost the next breath he reveals that Edward Ashburnham had an affair with John’s wife, Florence, for nine years.

The Good Soldier is the story of the complex relationships between Leonora and Edward Ashburnham and how their problems affect the lives of other people, particularly their innocent young friend, Nancy. This is the kind of book, I believe, that readers will understand differently each time they read it.

A Man Could Stand Up