I did an odd thing here. I saw that the third book of the Millennium Series was out in a graphic novel by Denise Mina, the terrific Scottish mystery writer, so I ordered it without looking for the other two (which I have since bought). So, I am reading and reviewing them out of order.

Thrust like this into the last volume and having not read the original books for several years, I had difficulty at first getting oriented. I especially had some problems with the multitude of characters, not realizing a cast of minor characters appears at the end. I remembered the general plot but not all the subplots. Still, this is not a problem for those who have read the series from the beginning.

Of course, the plot is the finale of the story of Lisbeth Salander, unjustly accused of murder of three people and of attempted murder of her own father, Zala. It is up to Mikael Blomkvist and the staff of Millennium Magazine as well as her other friends to try to help gather the evidence for her trial. In the meantime, the police are searching for her half-brother Niedermann, the scary murderer who can feel no pain.

The art and story line of this graphic novel are really fine, getting a bulky novel right down to its essence. This is the first time I’ve read the graphic novel for a book I’m already familiar with, and it made me contrast the two. I think the one thing a graphic novel loses is all sense of the original’s climactic moments. In particular, I’m thinking of two scenes: the one during the trial when Lisbeth finally speaks and the fight in the factory. The fight boils down several pages of suspenseful writing into a couple of frames. There’s no way to build up suspense similar to that of the novel. Still, my dabbling in this genre has made me feel it is an interesting one as long as I stay away from super heroes, which really bore me.

The Girl with the Dragon Tattoo

The Girl Who Played with Fire

The Girl Who Kicked the Hornet’s Nest 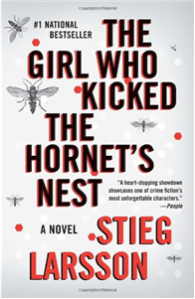 I just realized that, having reviewed the other two books in Stieg Larsson’s Millennium Trilogy, I never reviewed The Girl Who Kicked the Hornet’s Nest. This final novel will be difficult to discuss without giving away what happened in the previous books.

As Lisbeth Salander recovers in the hospital from her injuries, journalist Mikael Blomkvist investigates Alexander Zalachenko, the Soviet defector she shot in self-defense at the end of the last novel. He begins to think there has been a massive cover-up on the part of Säpo, Sweden’s security police, to hide Zalachenko’s crimes while he was viewed of value to them. Among those crimes were the horrendous beatings he gave Lisbeth’s mother, for he is her father.

Some former members of Säpo are currently colluding with Dr. Peter Teleborian, the psychiatrist who supervised Salander’s institutionalization when she was a girl, to either have Salander re-institutionalized or to murder her, so that their activities do not become known. Salander is able to assist in her own way with preparations for her trial when a sympathetic doctor smuggles her laptop computer and a phone into the hospital for her.

The freakish Niedermann is still loose, having murdered a police officer and carjacked a woman during his escape.

All these subplots are wrapped up through an exciting trial and a subsequent pursuit of Niedermann.

I believe this series is so successful because of a strong message about violence toward women, interesting and believable characters, complex but careful plotting, thrilling action, and a strong, compelling, and unusual heroine. If you have not read the series already, I strongly recommend it. Start with The Girl with the Dragon Tattoo.