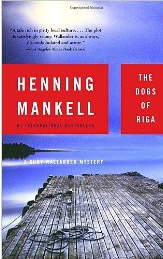 Henning Mankell was my introduction to Swedish crime fiction. I usually enjoy his mysteries, but have not really liked his “more serious” novels. The Dogs of Riga is another of his mysteries featuring Inspector Kurt Wallender.

In a novel set earlier in time than his previous mysteries, Wallender travels to Latvia in the days before the dissolution of the Soviet Union to discover why Major Liepa, a Latvian police inspector who has been working on a case with him, is murdered as soon as he returns home. Wallender is bewildered by the politics and workings of the deeply depressed country. He soon figures out that the person arrested for the murder is innocent.

Wallender responds to the pleas for help by Liepa’s widow, Baipa Liepa, to continue his investigation further than the Latvian officials want him to. He encounters widespread governmental corruption and the realities of living in this grim regime. Readers of Mankell’s books have heard of Baipa Liepa, because she is the woman he loves in books that take place in a later timeframe.

Wallender is his usual depressed self, eating bad food and getting little sleep. The setting of urban Riga, though, is much more dark than Mankell’s usual setting of rural Sweden.

I enjoyed the book, although I thought that Wallender seemed strikingly naive at times. Mankell’s writing is sometimes a little awkward, although it is usually spare and transparent.