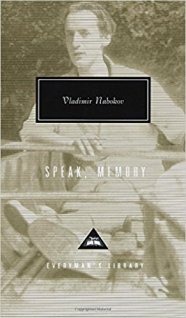 Although I admire Lolita, I went into Nabokov’s memoir with some trepidation. The three of his novels I read showed such a preoccupation with what he calls “nymphets”—beautiful preteen girls—that it was disturbing. It’s one thing to write a novel about a sexual predator and quite another to have the theme recur in all of your works. So, even though I knew that his partially autobiographical novel, Look at the Harlequins!, was ironically meant—that is, he depicted himself as people thought he was, not as he was, I’m wasn’t sure what to expect from Speak, Memory.

And it is unusual. Instead of narrating his life in a linear fashion, as you might expect, it instead explores themes in his life. So, there are earlier chapters listing the accomplishments of his ancestors, describing his governesses and tutors, later ones about his obsession with butterfly collecting, his efforts to write his first poem, and so on. The result is an odd dichotomy—for we still understand little of the day-to-day of his life while gleaning lots of details about the things he loved best and a vague understanding of the larger arc. I think he truly doesn’t want to tell much that is personal.

I most enjoyed the earlier chapters about life on his family estate outside St. Petersburg. His life there is depicted as idyllic, and it’s hard to know if it actually was or if it is in memory because he can’t return to it. Because of course his wealthy, elite family had to flee Russia after the Russian revolution.

As in Look at the Harlequins!,  he tells nothing about his wife, Véra, although he addresses her directly at times. He does tell about his feeling for his son and about the parks in Europe they visited when his son was small.

So, I found large portions of this book interesting and beautifully written. The man has the largest vocabulary of any writer I’ve ever encountered. Other chapters, like the one about the butterflies, where I would have had to look up every other word to understand it, or the one about chess puzzles, were not so compelling. Still, I started another book before this one and set it aside to finish this. Such is the power of a great writer even when you’re not always interested in the subject matter.

Look at the Harlequins!