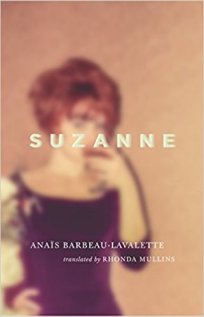 Sometimes you read a book that makes you want to consider it. Maybe you feel ambivalent about its subject matter or its approach. Maybe you want to ponder the choices made by its characters. Maybe the fact that you want to think about it marks it as good. I had all these thoughts about Suzanne.

This novel was given to me to read by my French-Canadian sister-in-law. It is an imagining of the life of the author’s grandmother, a poet and painter who abandoned her family when her daughter was three.

The novel is written originally in French and translated by Rhonda Mullins. It is written in the second person in short excerpts. Suzanne Meloche was always rebellious, it seems, and when she had to choose, she chose herself. After a difficult, poverty-stricken childhood in rural Ottawa, she struck out for Montréal. There, she almost immediately was taken up by a movement of artists and writers, called Automatism, led by Paul-Émile Borduas. Many of the people she associated with became well-known Quebecois painters. Eventually, she married Marcel Barbeau, an artist.

This novel makes compelling reading, as it explores the question of how far you should go to pursue your own goals. Suzanne is an interesting character who leads a rich life, although I don’t like her very much. In fact, I think her granddaughter is a little too understanding of her foibles. Perhaps her interpretation of Suzanne’s thoughts and feelings is correct—Suzanne did after all keep the pictures of her grandchildren that her daughter sent her. To balance that, though, is the harm she did her children by abandoning them and her reception of her daughter and granddaughter the one time they went to visit her.

As a work of authorship, it’s brilliantly written and compelling. Will you like it? I suppose it depends on how you feel about the subject.

How to Be Both

The View from Castle Rock