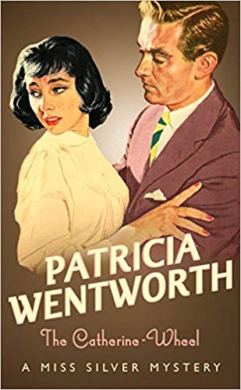 Jacob Taverner, a rich eccentric, invites some of the cousins of his extensive family to the family inn, The Catherine Wheel, for a reunion. He seems to have an ulterior motive, though, because he questions several about the stories of a hidden tunnel.

The inn has a past as a smugglers’ nest, and Detective Abbott thinks it is still so used, for drugs and stolen jewelry He asks Miss Silver to take a room at the inn to observe activities.

Jane Heron and Jeremy Taverner are among the cousins invited to the inn. It is cheaply furnished, ill kept, and creepy, and Jane’s misgivings are furthered when she recognizes Miss Silver as a detective she met before. She makes sure Miss Silver gets a room. That night, Luke White is found dead. Luke is a cousin on the wrong side of the blanket who worked as a waiter at the inn. Earlier, he was overheard telling Eily, the maid, that he was going to have her whether she wanted him or not, and if she tried to marry her sweetheart, John Higgins, one of the cousins who chose not to attend the reunion, he would murder him. Eily was discovered near the body, but so was another cousin, Florence Duke.

The dull-witted Inspector Crisp is ready to arrest John Higgins, but Miss Silver is quite certain something else is going on.

Wentworth is good at creating eccentric or likable characters, but she also telegraphs the bad guys fairly obviously, so that you know who was likely to be involved, just not why. The problem of repetition that irritated me in The Arlington Inheritance isn’t quite so pronounced in this one. Overall, the book is entertaining enough but not a great mystery. 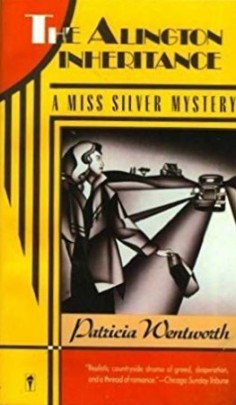 The identity of the criminal is not a secret in The Arlington Inheritance. Instead, the suspense lies with how Miss Silver, Wentworth’s Marple-like sleuth, will find and put together the clues.

My friend and I have been trading books lately, and she loaned me this one. At the time, she commented that she didn’t like the repetition. More about that later.

Jenny Hill’s guardian, her old governess, Miss Garstone, dies unexpectedly in a hit and run accident. When she is dying, she tries to tell Jenny about a letter written from her father to her mother. Her father died in the war, and her mother was injured shortly thereafter, not speaking again until she died shortly after Jenny was born.

After Miss Garstone’s death, her sister immediately descends to claim her property and grudgingly gives Jenny the little chest that is supposed to contain the letter. But when she opens it, no letter is there.

Jenny has nowhere to go, but Mrs. Forbes, her neighbor across the road, offers her a job as governess for her two girls, Meg and Joyce. Jenny was born in Mrs. Forbes’s house, owned at the time by her father, but as he didn’t marry her mother, Jenny as a baby was dispossessed by Mr. and Mrs. Forbes, her father’s nearest relatives.

Jenny thinks she is in love with Mac Forbes, who is occasionally attentive to her, but when she is away from him, she has doubts. When Mac visits this time, he seems to be paying more attention to her. However, Jenny overhears a conversation that chills her. She hears Mac tell his mother that Jenny’s father did marry her mother. Rather than tell Jenny, he plans to marry her, assuring himself the possession of the house and property.

Appalled, Jenny runs away from home, but trouble comes after her.

Wentworth draws some appealing although mostly one-dimensional characters in Jenny, some of her relatives, and Miss Silver. Occasionally, I mildly enjoyed this effort even though Wentworth’s writing style deals in a lot of repetition. Someone will recount something that has happened, that we already know about, sometimes several times. It’s not done for a reason, for example, to show that a witness is leaving something out, but simply seems to be her style and makes the book slightly longer. This doesn’t occur until the crime, though, which happens well into the book (as far as we know). After that, it can certainly be annoying.