On a bay in Newfoundland, Vivienne is collecting samples of sea life to study a phenomenon of luminescent tides, when she finds a creature. Although this creature is only suggestively described, we’re led to conclude that it’s a mermaid or a fish that led to the myth of mermaids.

Vivienne takes her find back to her boss, Colleen, who is thrilled. Colleen begins testing the creature to try to prove it is something heretofore undiscovered and notifies her own boss, Isaiah.

To Vivenne, the tests are too invasive, and the fish begins to lose its scales and seems to fail. When Isaiah brutally assaults her and Colleen angrily dismisses her complaint about it, Vivienne decides something must be done.

The Luminous Sea is narrated with luminous prose, leaving us with a book that is as beautiful as its cover (which, I admit, made me buy the book). This story about the balance between scientific discovery and humanity and about academic greed for recognition is really good.

The Mermaid and Mrs. Hancock

The People in the Trees 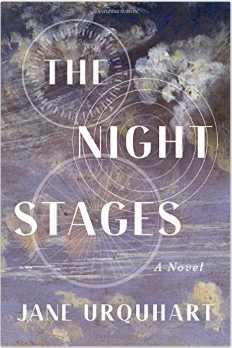 While reading The Night Stages, I kept wondering when, if ever, the stories of the characters would link up. The answer is, one character’s story does not, except metaphorically. Still, I thought the novel was at times poetic, and engrossing and affecting enough to recommend it.

It is post-World War II, and Tam is fleeing her married lover. Upset by a confrontation she had with him, she drove from her cottage in Kerry to Shannon Airport and took a flight to Gander in Newfoundland. There, she has been stranded by fog for several days. While she waits in the lounge, she examines a cryptic mural, Flight and Its Allegories by Kenneth Lochhead. Tam’s relationship with Niall has been poisoned, not by his thoughts of his wife Susan but by his memories of his lost brother Kieran.

Kieran as a boy suffers from rages that overpower him. When he was young, his mother and her chemist, both addicted to pain killers, committed suicide. His father finds it impossible to handle Kieran, who hears his mother’s voice inside the house, but Kieran likes the housekeeper, Gerry-Annie. When Gerry-Annie announces she is taking Kieran home with her to live, no one objects.

Kieran develops a deep love of the Kerry countryside and travels all over it on his bicycle. While Niall is studying in college to be a meteorologist like his father, Kieran is an unskilled laborer who loves the stories and songs of the country people. Then Kieran falls in love with Susan, Niall’s fiancée. The story climaxes around the Rás, a bicycle race through the Irish countryside.

Making the novel seem more diffuse is the introduction of Kenneth Lochhead as a character. We see how episodes from his life have inspired characters in his mural. But the description of the mural is a difficult thing to grasp just through text, and the small pictures that come up in Googling it convey very little, although I would love to see it sometime. It seems to me as though the emphasis on the mural and this character take away some of the power of the novel.

Flight is a recurring theme of the novel. Tam used to be a pilot during World War II, flying planes from one location in the U.K. to another. She is on a flight from her earthbound life in Ireland, and of course Kieran has flown Ireland. Then there are the descriptions of biking down the steep mountains and through the valleys of Kerry.

Although I think the novel would have been more cohesive without Kenneth, and in retrospect, Tam’s past as a flyer seems irrelevant (although making me wonder why the person she was before would put up with the situation with Niall), I was deeply involved in the story of Kieran, Susan, and Niall. I think this is an ambitious novel that doesn’t quite accomplish its goals but is beautiful and definitely worth reading.

The Remains of the Day

A Wreath of Roses 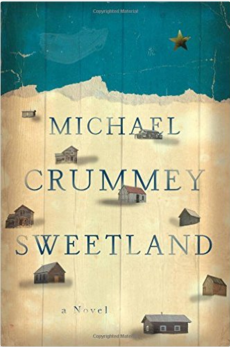 Best book of the week!
At the beginning of this novel, Moses Sweetland is an old man living in a small community on an island off the coast of Newfoundland. Although the island thrived at one time, now it is occupied by just a few families, including Sweetland’s niece Clara and her autistic boy Jesse.

All his life, Sweetland has lived on the island, which is called Sweetland after his family. Now, the Canadian government wants to buy out the remaining residents, move them off the island, and decommission it. The lighthouse where Sweetland worked for years is now a battery-driven beacon that gets serviced a couple of times a year.

At the opening of the novel, Sweetland is among only a few people who have refused to take the deal. If they don’t all take it, no one gets it, so someone has been leaving Sweetland threatening notes.

This is a powerful novel that covers most of the major events of Sweetland’s life in flashbacks. We see that events have left him very little except the life on the island, where he traps animals and catches fish, and his relationship with Clara and Jesse.

To tell much more would be to tell too much. Suffice it to say that Crummey gets us to care very much for this crusty old man and also for his community. As in Galore, which I really loved, Crummey brings back even the ghosts of the little island.

Reading River Thieves did not leave me with the same impression of wild originality as did Galore, the other Michael Crummey novel I read. Still, it is an interesting historical novel about the interactions between Europeans and the Beothuk Indians in early 19th century Newfoundland.

This novel is based on a true incident. It concerns an investigation into the killing of a Beothuk man by trappers after they went looking for redress for some thefts. This expedition brought back a Beothuk woman, later called Mary, who is captured at the beginning of the novel. But the narration of this story is far from straightforward, and we do not learn exactly what happened until the end of the novel.

Further, the characters’ actions are affected by a long history of their personal interactions. John Peyton is a young man at the beginning of the novel. He is in love with Cassie, his tutor and his father’s housekeeper, but she is somewhat mysterious and keeps aloof from him. John Sr. hired Cassie thinking that she and John Peyton might marry, but a misunderstanding interferes.

Lieutenant David Buchan encounters most of those figuring in the incident when he makes an earlier attempt to establish more cordial relations with the Beothuk than the violent ones currently existing. This expedition, which includes John Peyton, John Sr., and some of John Sr.’s employees, ends in disaster. It is the seemingly upright Buchan, later a captain, who is put in charge of the subsequent investigation.

This story is told at a remove from the characters. Although we learn the thoughts of several of them, Crummey never reveals everything, forcing us to view his characters more as an ensemble rather than to consider one a central character. In Galore, Crummey used this technique to depict the occupants of an entire village. Here, it is not quite as satisfying.

A whale comes ashore at the remote coastal town of Paradise Deep, Newfoundland, in the early 19th century. The people, who have been starving all winter, come out to scavenge what they can of the meat. When Devine’s Widow, an old Irish “wise woman,” cuts open the belly of the whale, a man falls out, pale as an albino, mute, but still alive. Although he stinks like a fish, the Devine clan gives him room in a shed and calls him Judah. Nevertheless, he is treated with dread and superstition until he goes out fishing one day with Colum Devine and they take a huge load of fish in waters that have been barren that season.

The Devines have been at odds with the powerful King-Me Sellers since he proposed marriage to a young Irish bondswoman years ago and she refused him rudely, then went off to marry Devine, practically the first young man she met. Their relationship was not improved years later when King-Me’s daughter Lizzy married Colum Devine.

When King-Me’s spite turns against Judah, the only way the Devines can save him is by marrying him to Mary Trephyna Devine, Colum and Lizzy’s daughter and King-Me’s granddaughter.

Michael Crummey’s multigenerational novel captures the relationships between these two families along with the history of the town, with all its eccentric characters, ghost stories, myths, and tall tales. The novel is fascinating, unusual, and beautifully written. I don’t usually enjoy magical realism, but in this novel it is handled so well that I accepted it and was engrossed in the story. Galore is probably unlike any novel you are going to read, although in its focus on a sea-going people and its occasional feel of a sea tale, it reminds me a bit of We, the Drowned  by Carsten Jensen.