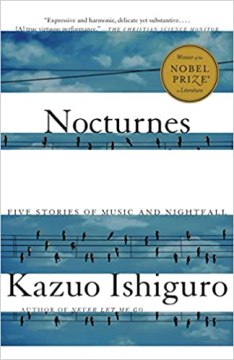 Nocturnes is a collection of five loosely linked short stories all on the themes of music and night. A few of them are linked a little more closely by repeating characters. All but one feature struggling musicians.

In “Crooner,” the unnamed narrator is an Eastern European guitarist eking out a living in Venice when he meets Tony Gardner, a once-famous singer his mother listened to. When Tony invites him to help serenade his wife, Lindy, he learns that Tony is so eager to make a comeback that he is willing to give up something he loves.

In “Come Rain or Come Shine,” Ray, a middle-aged English language instructor, is invited to stay with his old school friends, Charlie and Emily. Once there, though, he finds he’s been invited to be a negative contrast to Charlie, showing how much more successful Charlie is. He finds common ground with Emily only in their shared taste in music.

In “Malvern Hills,” a would-be singer-songwriter is staying with his sister and helping out at her café when he meets two professional musicians, Tibs and Sonja, on holiday. He unwittingly gets involved in the breakup of their marriage.

In “Cellists,” it is perhaps the same narrator from the first story who tells the tale of Tibor, a gifted young cellist he and his friends met seven years earlier. Tibor’s personality changes once he is taken under the wing of Eloise McCormack, who claims to be a virtuoso cellist.

This is a book that explores the place of music in each character’s life, and in some cases, the character’s commitments to music or to fame. Although there is a lot going on in these ultimately sad tales, they felt unsatisfying to me in some way. I felt that some of the situations were ridiculously unlikely, as well. This is a book I read for my James Tait Black project.

In a Strange Room

Best of Five!
When Balzac and the Little Chinese Seamstress was so popular, I was not a fan. I disliked how the two male college students patronized and abused the girl, even though she won through in the end. I also vaguely felt that the events of the Chinese Cultural Revolution were being trivialized, even though I was not really sure about the facts. Reading Do Not Say We Have Nothing confirmed that I was right.

Marie is a young immigrant Chinese girl living in Vancouver, British Columbia, in 1991. She and her mother are confused and grieved, because after the family escaped from China, her father, Jiang Kai, first deserted them to move to Hong Kong and later committed suicide.

Marie’s mother receives a call from China, from Ling, the wife of Jiang Kai’s beloved teacher, Sparrow. Ling says that her daughter, Ai-Ming, has had to leave China because of involvement in the Tiananmen Square protests, but she has missed the amnesty offered by the U.S. Ling asks that they give Ai-Ming a home.

Ai-Ming becomes an older sister to Marie. She tells her stories about her family—her great uncle, Wen the Dreamer, who courted her aunt Swirl with chapters from a forbidden book called the Book of Records; her grandparents, Big Mother Knife and Ba Lute, wandering musicians; and her father Sparrow, a composer of music. Ai-Ming tells of the days of her father, her cousin Jhuli, and Marie’s father, Jiang Kai, at the Shanghai Conservatory. Shadowing all their lives is the Cultural Revolution and its horrible excesses—murder and exile of intellectuals, forced denunciations of relatives, ransacked homes, humiliation and ruining of the innocent.

At first, I was irritated by the style of Ai-Ming’s story, which feels a little like a fairy tale, but it was not long before I was completely absorbed in it. The novel is a heart-rending tale about identity, music, love, and political destructiveness. This was another excellent book that I read for my Man Booker Prize project.

I am not really a diary reader. Even Samuel Pepys was boring to me. So, when my good friend recommended Sergey Prokofiev’s diairies, I wasn’t buying it. As a historian, she finds diaries a lot more enthralling than I do. In any case, she bought me the book, a whopping 800 pages long, and I made a serious attempt to read it.

Let me first say that if you enjoy reading diaries, you will probably enjoy this book a lot more than I did. Prokofiev was a prolific diarist, as is obvious when you consider that this volume only covers seven years. He also wrote very well. But in 1907, he is only sixteen years old. Although he is a prodigy in music and extremely intelligent, he is a teenager. His diaries are concerned with his triumphs in school, music, and chess; his preferences for his female schoolmates, which change daily; and his verbal scoring against his friends and instructors. All of his enthusiasms center around how well he did, how much better than others. He comes off as a competitive little jerk at worst (I wanted to use a different word) and an immature boy at best.

Half of the book covers 1913, which should be a momentous year because of Russia’s slide toward war, but I only made it to 1909. This is probably a great book for someone else, and maybe I’ll try it again later. I would have skipped a few years, but he constantly mentions people, and I was sure I wouldn’t know who half of them were if I skipped ahead.

Mastering the Art of Soviet Cooking

Goodbye to All That