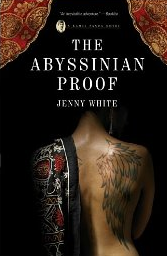 In 19th century Istanbul, the magistrate Kamil Pasha  is assigned to find out who is stealing valuable relics throughout the city and selling them to London. He is instructed to find the relics and bring them back to where they belong. One of the relics is contained in a reliquary that has been guarded since the last days of the Byzantine Empire by a sect of Abyssinian descent called the Melisites. The relic is called the Proof of God.

Kamil is an upright and dedicated civil servant. While he is investigating, he learns about the history and beliefs of an odd group of people, the descendents of Abyssinian slaves who live in an abandoned cistern and are part of the city’s underworld.

In pursuit of the relic thieves and in investigation of some apparently related murders, we follow Kamil through the subterranean passages under Istanbul.

Kamil is also attracted to Elia, a refugee artist who lives in his sister’s house. Elia has suffered terribly, though, and is not really prepared to pursue more than friendship.

As with Barbara Nadel’s more modern Turkish mysteries, I find novels set in this exotic locale interesting, and the history presented in The Abyssinian Proof is fascinating. Sometimes, I wish that Kamil Pasha wasn’t quite such a serious man, however.

The Winter Thief is the latest of Jenny White’s mysteries set in late 19th Century Istanbul about the investigations of the honest and hard-working Special Prosecutor Kamil Pasha.

It is a freezing cold, wintery holiday in Istanbul when Vera Arti visits an Armenian publisher to try to convince him to publish The Communist Manifesto in Armenian. Disappointed in her attempts, she doesn’t notice when someone follows her home. When her husband Gabriel returns abruptly to their apartment and tells her they must leave immediately, she argues that she must pack her things. He leaves her to get a carriage for them, but while he is gone, she is taken by the Sultan’s new secret police.

In another part of the city there has been a bank robbery and next door a massive explosion at a café followed by a fire where many people are injured or killed. Kamil Pasha is helping out at the scene when he finds evidence that his brother-in-law Huseiyn might be one of the victims.

Gabriel Arti’s mission is to open a socialist commune in Armenia, and to do that he arranged to purchase a shipment of illegal guns and robbed the bank. His fears for his wife lead him to seek the help of an enigmatic but powerful acquaintance of Kamil Pasha’s who helped him arrange the gun shipment. At the man’s suggestion, Gabriel departs for Trabzon and the commune, leaving the other man to try to find his wife.

Although the Ottoman empire has traditionally been one that tolerates people of different religions and race, tensions are rising. Vahid, a vicious, sadistic, conniving commander of the Sultan’s new secret police has a plot to gain more power by making the Sultan believe that the Armenians are a threat to the empire and then providing himself an opportunity to end the threat. Vahid believes that Huseiyn might have been having an affair with the woman he intended to marry, who died in the fire. In his efforts to find Huseiyn and wreak his vengeance, he runs up against Kamil Pasha and his sister, who is frantically trying to find her husband. The next thing he knows, Kamil Pasha has been framed for the murder of a young Armenian girl.

As we follow the adventures of all those people, as well as Gabriel, the members of the commune, and others, the book begins to feel too disorganized and diffuse. My interest flagged a little. However, the threads of the story all come back together when the Sultan dispatches Kamil Pasha to the wilds of Armenia with a small troop of soldiers to find out whether the new settlement is a band of Armenian revolutionaries or a harmless socialist commune.