Jax’s sister Lex has been calling a lot lately. Jax knows that means Lex is off her meds and in one of her manic phases. So, Jax, who has been estranged from her sister, doesn’t answer the phone. Lex’s messages are cryptic and incomprehensible, something about measurements. Later, Jax’s aunt calls to tell her that Lex is dead, drowned in the spring-fed pool behind her house. Since Lex has spent much of her life in the pool, suicide is assumed.

Back in Vermont for the funeral, Jax finds the family home a wreck, filled with notes and other documents Lex collected about the history of the house. The house had been their grandmother’s, the place where the two sisters spent every summer. One reason Jax was angry was because the house was left to Lex, whom she believes everyone liked best. Jax decides to try to find out what happened to Lex, what Lex discovered. It all seems to center around the pool, which has a local reputation of being cursed. Several people have drowned in it.

In 1929, Ethel and Will Monroe take a romantic trip to a new hotel next to a spring-fed pool. The spring has a reputation for granting wishes and healing. Ethel has been trying to conceive, so she goes to the pool and says she will give anything to have a child.

Back in 2019, Jax finds wet footprints in the house and catches glimpses of something in the pool. She also figures out that Lex has been measuring its depth, although the girls have always been told it was bottomless.

In general, this is a nice, creepy story, although I felt that maybe it signaled the truth of the pool a little too early. Of course, that adds to the suspense, as the reader knows more than Jax does. Another good one for McMahon.

Helen and Nate bought a piece of acreage in the New Hampshire countryside and are building their dream house, doing most of the work themselves. What they don’t know, though, is that 90 years ago, Hattie Breckenridge was hanged on their land as a witch. Since then, the property is said to be haunted, especially the nearby bog.

Next door, 14-year-old Olive resents the newcomers. Her mother ran off a few months before, and her father, Dustin, has gone off the rails a bit. He keeps renovated rooms in their house but not finishing them, telling her that her mother will love the house when she returns. Olive has been searching the bog for Hattie’s treasure, rumored to be on the neighbor’s land, something her mother had been doing before she left. Olive thinks Helen and Nate will get in the way of her finding it, so she has been stealing things from their trailer and work site, hoping to drive them away.

Helen gets interested in the story of Hattie. After she and Nate incorporate an old beam from the tree on which Hattie was hanged into their house, Helen comes to believe that Hattie is trying to tell her something.

Jennifer McMahon is known for her spooky thrillers set in New Hampshire. This one is fairly good, even though some of her others have been scarier. Although you are led to wonder about Helen’s sanity, I didn’t really doubt that there would be a ghost. More is going on in this book than that, however.

The previous two books I’ve read by Jennifer McMahon were a weird combination of unusual but realistic life and the supernatural. Burntown features the supernatural less, but in some ways is more bizarre and in others verges on the precious.

When Miles Sandeski is a little boy, he sees a man wearing a chicken mask murder his mother. Despite his assurances to the police that the man was not his father, the police think his father did it. Later, his father takes his own life.

Miles’s father handed down an invention taken from Edison’s lab that allows people to talk to the dead. Miles uses it to talk to his mother and find out who killed her. Then he goes off to do something about it.

Years later, something dreadful happens at Miles’s house. His daughter Eve, now calling herself Necco, ends up living on the streets in their industrial home town of Ashford, Vermont. She doesn’t remember what happened, but her mother has told her that a flood washed away their home and killed her father. Her mother became a Fire Eater, ingesting a drug that brings visions of the future. But her mother has died, apparently jumping off a bridge.

Necco is camping out in a car with her boyfriend when her boyfriend is murdered. He has been looking into her past and promised to show her something the next day. The police think she murdered her boyfriend and are trying to find her. However, they don’t know who she is.

Theo is also running from someone. Her girlfriend Hannah talked her into selling drugs to the high school students. Theo did a big deal and then left her sachel at Necco’s place when some kids took her there to watch Necco breathe fire. The drug dealer is after her for his money, but in going back for her sachel, Theo may have seen the murderer.

As Necco and Theo try to figure out what’s happening, they get help from unexpected places and make new friends. Although there is a certain amount of danger in this novel, it is far less eerie than the previous two novels. It depends more on strange characters and desolate urban settings than on its supernatural elements. I liked it well enough but felt it verged oddly toward being a feel-good novel full of eccentric characters at the conclusion.

Reading two books by Jennifer McMahon doesn’t make me an expert on her, but they do have something in common. They both show a fascination with the supernatural and the grotesque.

Like her more recent book The Night Sister, The Winter People is set in Vermont. It takes place in two time periods, the present and 1908.

In 1908, Sara Harrison Shea lives with her husband and daughter on a barren farm near a landmark called the Devil’s Hand. Sara was raised by a Native American woman she calls “Auntie,” whom the nearby villagers visit for potions and spells. We know from the beginning of the novel that she died a terrible death and that parts of her story are recorded in her diary, which has pages missing. In the village of West Hall there have long been legends of “Sleepers,” people who are brought back from the dead.

In the present time, teen Ruthie returns late from a date to find her mother, Alice, gone. When Alice hasn’t returned by the next day, Ruthie and her little sister Fawn begin looking through the house for clues to where she has gone. In a series of hidey holes, they find some strange things, a gun and the wallets of two people from Connecticut. Since the countryside around West Hall is known for people’s disappearances and the Devil’s Hand at the edge of the farm is supposedly haunted, Ruthie begins wondering what her mother could be involved in and doesn’t call the police.

Katherine is grieving the death of her husband, Gary. He had been distraught since the death of their son, but recently things seemed to be better. Then he told her he was going to Cambridge to photograph a wedding but died in a car accident in Vermont. What was he doing there? When Katherine gets back his charge receipts, she finds he ate lunch in West Hall, so she decides to move there to try to find out what Gary was up to.

McMahon builds up quite a bit of suspense in this novel, often from small things like the tapping on a closet door. The novel centers around a series of grief-stricken people and the belief that people can come back from the dead. Can they? And if so, in what form? 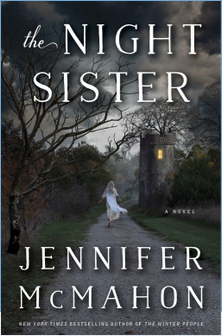 I have never read anything by Jennifer McMahon before, so I have no way of knowing whether The Night Sister is characteristic of her or not. Certainly I was captured by this creepy and original tale.

The novel is set in three different time periods and features two related sets of characters, but it begins chillingly in the present when Amy takes a shotgun up the stairs of her house in Vermont. Jason, her friend from childhood who just talked to her a week before, is shocked to be called as a policeman to her house, only to find Amy and her family dead. Only her 10-year-old daughter Lou is outside on the roof.

In California, Piper receives a call from her sister Margot. She is shocked to learn that her ex-best friend Amy and her family are dead. Even more shocking is that it appears Amy killed her family and shot herself. Piper leaves immediately for Vermont, but she is preoccupied with memories of the summer she and Amy were 11, the last summer they were friends.

Occasionally, the novel returns to the 1950’s and the story of sisters Rose and Sylvia. Sylvia is the beautiful, favored child, and Rose feels she is treated unfairly. She believes something is wrong with Sylvia and starts wondering about her grandmother’s stories about monsters. She catches Sylvia sneaking out at night to go to the tower near the family motel.

Back in the present, Piper rifles her memory about the discoveries the girls made when they were 11. By then, Amy’s mother Rose is seldom around, rumored to be in a mental hospital. Sylvia disappeared years ago, presumed to have left for Hollywood and never heard from again.

This novel is not only truly suspenseful, but it is hard to predict. Several times I was convinced I knew what was going on, but I never did. It’s a truly gothic thriller.