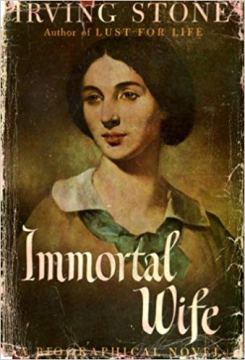 Irving Stone was extremely popular in the mid-20th century for mostly biographical fiction. His most famous novels are The Agony and the Ecstacy about Michelangelo and Lust for Life about Vincent Van Gogh. Immortal Wife is his second book, about the life of Jessie Benton Fremont, the wife of explorer John C. Fremont.

Jessie Fremont certainly had an exciting life, even though a lot of her time was spent waiting. She was actively involved in her husband’s professional life. The work she did of helping her father write his reports when she was unmarried, she continued with the reports Fremont submitted after his explorations. She lived on an Indian reservation during his second expedition. She was one of the first white women to travel to San Francisco via a trek across Panama. She lived in untamed San Francisco and later Mariposa during the lawless days of the Gold Rush. When Fremont lost a fortune through unwise partnerships, she supported the family by writing stories.

Fremont was a controversial figure, and Jessie was partly to blame for a lot of the controversy. Upon his first command, she prevented him from receiving orders that would have made him turn back, and he was courtmartialed later partially because of this incident. Her advice resulted in more than one incident like this. Partially because of an attitude that the couple knew best, their fortunes underwent many ups and downs. Jessie was quite interfering in her attempts to help her husband, and they made many enemies.

I wanted to like this book a lot more than I did. Part of my problem with it wasn’t fair, because I don’t believe in judging a book out of its time. But it was so accepting of Manifest Destiny, the right of the United States to the lands of the west. Fremont essentially starts a war as an excuse to steal California from Mexico, stating that Mexico wasn’t doing anything with it. Comments after an expedition that he had stood on top of a mountain in the Wind River region where no one stood before obviously meant no white men. This kind of thing grated on me for the first quarter of the novel.

On the positive side, the novel is interesting and well researched. On the negative side, at 400 dense pages, it is a bit longer than it needs to be through many episodes of Jessie’s heart-rendings about her marriage. Finally, although Stone clearly meant Jessie to be a sympathetic character, I didn’t like her much.