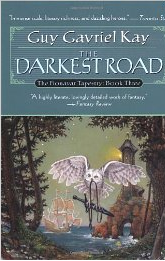 I guess it’s about time for me to finish The Fionavar Tapestry series by reviewing the last book. I have avoided doing this because my notes mostly consist of comments about who I was sad about (Finn, Tabor, and Diarmuid) and who I didn’t care about (Jennifer, Darien, Dave, Paul, Kevin).

The end of the novel is, of course, an epic battle. I would actually like to read a fantasy novel that doesn’t end with an epic battle. But the crux of the matter lies with the god-child Darien, who has to decide whether he is good like his mother Jennifer or evil like his father Rakoth. Unfortunately, because Kay chose the route of having Jennifer be Queen Guinevere reincarnate, she isn’t allowed to develop as a character but is treated more as a symbol. As I stated before in my review of The Wandering Fire, I think the whole Guinevere/King Arthur/Lancelot plot is completely unnecessary.

My other significant comments are that the pace is very slow and I feel the final book, although affecting, perhaps tied up all the loose ends too neatly. I would like to close, unusually, by quoting a review from Publisher’s Weekly, because it is true and made me laugh. “The exceptionally detailed background of this fantasy would be more impressive if it didn’t suffocate a book already burdened with static narrative and turgid, poetic prose that all too fittingly captures the adolescent posturing of its transplanted college student protagonists.” You might remember my comments about the juvenile characters in my review of  The Summer Tree.

The Fionavar Tapestry is a well-known work by Guy Gavriel Kay, but really, if you want to try reading him, you can do much better. Pretty cover, though. 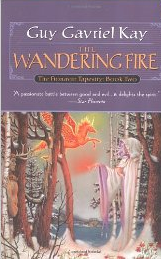 Like the middle book of many trilogies, The Wandering Fire has so much going on in it that it is hard to describe. It of course is meant to continue the plot of The Summer Tree, the first book of Guy Gavriel Kay’s The Fionavar Tapestry, and leave us with a cliffhanger before the final book.

In the first book, a mage brought five university students to Fionavar, where they were separated to fulfill their various roles. The five friends returned to their own world at the end of the book to rescue Jennifer from the hands of the Unraveller. The fact that they could have done this any time after she was kidnapped, fairly early in the previous book, and saved her from being raped and tortured seems to have escaped everyone.

Most of them return to Fionavar when Jennifer is near term with a child who will be half man, half god. Kim stays behind to wake up Arthur Pendragon and bring him along. Of course, Jennifer turns out to be an incarnation of Guinivere.

I think the Arthur and Guinivere subplot was where the book pretty much lost me. I know this novel  is a mishmash of just about every Celtic myth, but King Arthur? Really? Could we not get more original than this? I think this plot is where the novel really shows its roots in the early 1980’s. It also seems to have been written by a very young man, although Kay was in his early 30’s when it was published. Again, as I mentioned in my previous review, the characters are not well developed, and the men particularly seem immature.

Long ago I read books one and two of Guy Gavriel Kay’s The Fionavar Tapestry but was unable to find the third book. Awhile back, I found copies of all the books and decided to re-read the trilogy. It is going to be very hard for me to divorce my review of The Summer Tree, the first book, from that of the entire trilogy, because my impressions are of the complete trilogy, but I remember thinking that it was the best of the three books.

Five friends attend a lecture by Professor Lorenzo Marcus on the University of Toronto campus. After the lecture, he reveals that he is actually the mage Loren Silvercloak who has come to them from Brennin on another world to ask them to travel there and celebrate the reign of High King Ailell. (Of course, they decide to go.) One of them lets go of the others during the transfer and finds he is separated from the others for much of the action of the novel. On Brennin, it turns out to be the eve of a great battle, during which each of the five find they have their special parts to play.

I had more to say in my notes about my impressions of this book than the plot, which is complicated. I feel that the book, while interesting and beautifully written, is much more immature than the other Kay books I have read. (It is his first.) The strangers coming to save another world idea has been done to death, and the second and third books become even more trite with the introduction of a King Arthur and Queen Guinevere plot, which I find tiresome. The five main characters are relatively uninteresting, and some of the male characters, particularly, are a little juvenile. Finally, the entire trilogy seems dated, particularly in the behavior and attitudes of the characters. My impressions of other Kay books, such as Tigana or The Song for Arbonne, are that they are more rich and subtle.

I decided to try a book by Guy Gavriel Kay because I read somewhere that he is a great historical novelist who disguises his books as fantasy. I read another book a long time ago but more recently picked up Tigana. Each of his books seems to have the setting and atmosphere of a different medieval European country, although they are set on other worlds. In this case, the country is Italy.

On a peninsula made up of nine provinces, the provinces have been conquered and divided up between two tyrant sorcerors, Brandin of Ygrath and Alberico of Barbadior. During one of the last battles, Brandin’s son was killed by Tiganian soldiers. As revenge, Brandin had the Tiganian prince’s family killed and cast a spell so that no one except those born in Tigana can remember its name. That is, I think, an interesting and original idea that has far-reaching effects.

Years later, a young singer named Devin falls in with a group of wandering musicians and learns from them that he is from Tigana, although he cannot remember, as his father took him away as a child. The group, lead by Alessan, the last prince of Tigana’s royal house, has been waging psychological warfare to free the province from both tyrants and revive the name of Tigana.

These novels are well written and rich in detail. Unlike Kay’s most famous work, The Fionavar Tapestry, which seems immature at times, it is more fully realized and mature.