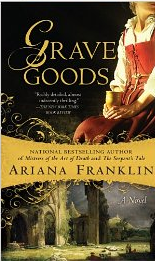 In the year 1154 a dying monk sees what he thinks is a vision of the burial of King Arthur after an earthquake at Glastonbury Abbey. He tells his nephew about it as he dies. Twenty years later when King Henry II is putting down a Welsh rebellion, the nephew, a Welsh bard, tells him the story hoping to save his own life. Henry sends a message to Glastonbury, which has just suffered a great fire, and the monks find a coffin buried in the described location that seems to contain the corpses of a man and a woman.

The penurious Henry would love to announce that they had found the bodies of Arthur and Guinever, because the resulting monies from pilgrimages would save him having to pay to rebuild the abbey. But how can he be sure someone won’t come to claim the bones belonging to his Uncle Tom and Aunt Gladys? By summoning his “mistress in the art of death,” Adelia Aguilar, he hopes to determine at least their antiquity.

Grave Goods is a novel in Ariana Franklin’s Mistress of the Art of Death series. Adelia Aguilar is a graduate of the School of Medicine in Salerno, at the time the only such facility that would accept women, and an expert on the causes of death. She arrived in England on a previous matter, but Henry has found her so valuable that he has never granted her a passport to leave the country. Since she is a woman, her word is not respected by most men, so she pretends she is a translator for her Arab servant Mansur, who pretends to be the doctor.

Henry’s soldiers find Adelia and take her away as she is travelling with her friend Lady Emma Wolvercote to Wells to claim Emma’s son’s property from his grandmother. But when she arrives in Glastonbury after meeting with Henry in Wales, Emma has disappeared. The monks give Adelia’s party an unfriendly greeting, and while she and Mansur are looking in a crypt to find samples to compare with the corpses, someone tries to bury them alive. Something is not right at the abbey, and Adelia is not best pleased to be saved by Rawley, the Bishop of St. Albans, her ex-lover.

I have been reading this series for awhile. At first, I wasn’t sure I bought the premise, but the books are rich with historical details and the forensics information available at the time, and Ariana is a likeable heroine. It’s not her or Rawley’s fault that he was made a bishop (he was a soldier when she met him), and the blending of romance and mystery works fairly well here, which is unusual. The romance is played down in favor of action and suspense. If you like a good historical mystery, you’ll probably enjoy these books.