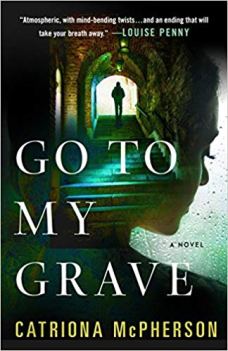 Donna Weaver and her mother have invested everything in The Breakers, a large house on the Galloway coast that they have made available as either a self-catered or fully catered vacation rental. Donna is excitedly awaiting their first guests, an anniversary party of cousins and their spouses, while her mother attends a hospitality convention.

When the guests arrive, however, it becomes clear that they have all been there before. Twenty-five years ago, they attended a 16th birthday party for Sasha, the man whose wife, Kim, has planned this trip.

The reactions of the guests when they recognize the house make it clear that they do not relish memories of this party. Then, shortly after they arrive, things begin appearing in the house that hearken back to that occasion. What is happening in the house? Is one of the guests trying to gaslight the others?

Occasionally, we see flashbacks to 1991, when a 14-year-old local girl named Carmen is invited to the party. When she arrives, she brings along her 12-year-old sister.

This novel is truly riveting, although the answer to what is happening seems a little too contrived. Although McPherson is known for her “cozy” thrillers, this one is probably more accurately described as a modern gothic thriller. The ending to it is a bizarre mixture of cozy and chilling. I didn’t know quite what to think of it, but the best term I can come up with is “morally challenged.” We are presented with an ambiguous conclusion to tone down the ending, but I know very well what I think happened.

As She Left It