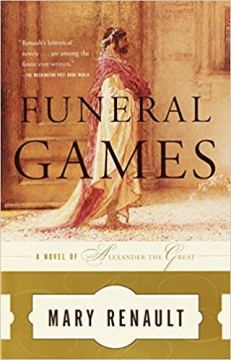 It may surprise some readers that (spoiler!) Alexander the Great dies at the end of the second book in Mary Renault’s Alexander trilogy. What, then, could the third book be about? Actually, I found it the most interesting of the three novels, as it deals with the intrigues and battles for power over his empire after his death.

Alexander died leaving no named heir and three unlikely possibilities—his half-witted half brother, Arridaios, and two unborn children by Roxane, the vicious daughter of a Baktrian hilltop chief, and Stateira, a Persian princess. Stateira was living with her grandmother, but before Stateira can find out about Alexander’s death, Roxane writes a summons purporting to be from him. When she and her sister arrive, Roxane poisons them.

This act of treachery is the first of many, as Alexander’s generals and surviving relatives struggle for power. His sister, Kleopatra, makes a play for power through marriage to one of the generals. His half-sister, Euridike, has been betrothed by Alexander to Arridaios. He is used as a pawn by various regents trying to grab power, but the downfall of Euridike and Arridaios comes when Olympias, Alexander’s mother, whom he always kept way from power, takes them prisoner.

The book follows Alexander’s legacy—what happens when the empire he reigned is taken by ordinary people. The best off of his former generals becomes Ptolemy, who sensibly retires to Egypt to form the Ptolemaic dynasty and writes a book about Alexander’s life.