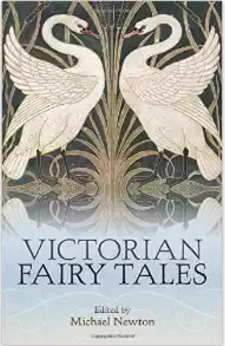 Apparently, in Victorian times there was a fashion for fairy tales. Not only did some writers, especially of children’s books, concentrate on them, but many writers of other types of works wrote them as well. Although Victorian Fairy Tales is published as a scholarly work with notes and essays, the tales are well worth reading by anyone, and many of them are by well-known writers.

My favorite tale was “The Rose and the Ring,” by William Makepeace Thackeray. It is about a couple of usurping kings and the confusion that results when an enchanted ring and a rose that each make the wearer irresistible to the opposite sex are traded around among the characters. The story is very funny, with different types of humor to appeal to both adults and children, as well as silly names and repetition, which children love. The pictures by Thackeray from the original are wonderful.

“Prince Prigio” by Andrew Lang is another funny tale, about a prince who is so smart that he annoys everyone. Another outstanding tale is by E. Nesbit, “Melisande,” about a princess who is cursed by a wicked fairy to be bald. Her father gives her a wish, and as happens in fairy tales, she doesn’t wish wisely.

Other favorite stories are “The Queen Who Flew” by Ford Madox Ford and “The Reluctant Dragon” by Kenneth Grahame. “The Reluctant Dragon” and “The Selfish Giant” by Oscar Wilde are the only stories in the volume I have read before, although I vaguely remember there being a copy of “The Little Lame Prince” by Dinah Mulock Craik around our house.

There is much to enjoy in this book, both for children and adults. I thought a couple of the stories were a bit ethereal and symbolic to be enjoyed much by children (or by me), but most of them were fun to read.

Folktales of the Native American