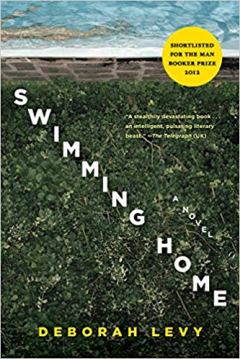 I didn’t know what to make of Swimming Home because the situation was unbelievable to me. First, there is some timeline confusion because of a short scene dated July 1994 in which Kitty Finch is driving dangerously through the Alpes-Maritimes at midnight with a man. The scene seems threatening, and you get a sense of dread.

Then, the main action of the novel begins with no timeframe, so that you don’t know if the preceding scene comes before or after it or even what year we’re in until there are references later on.

Joe Jacobs, a poet and serial philanderer, has rented for the summer a villa in the Alpes-Maritimes with his wife Isabel, a war correspondent, his young daughter Nina, and another couple. They come home to find a naked woman in the pool, looking dead. She is not dead, she is Kitty Finch, a beautiful but clearly disturbed woman. She makes an unconvincing explanation that the owner lets her stay there sometimes off-season and she got her dates mixed up. It is not off-season, however.

Do they show her off the property? No, they do not. They invite her to stay in the extra room. In particular, Isabel invites her, which gives rise to wondering for the rest of the book.

In fact, it shortly comes out that Kitty knew Joe Jacobs was staying there and wants him to read her poem, “Swimming Home,” which is about suicide. It is clear all the way that the novel is working toward death, but the ending is surprising.

I read the novel for my Booker Prize project, and I’m still wondering about it. 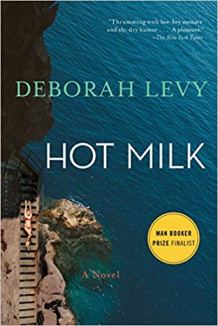 Sofia is an anthropology graduate student who has given up her job and her room in a storage cupboard to care for her mother, Rose, as she seeks medical help at a clinic in Spain. Rose has a myriad of symptoms, but no one has been able to diagnose a problem. Mostly, she is concerned about her legs. She can’t walk, at least when she doesn’t want to. She can’t feel anything, except when she does. She complains constantly, and nothing is ever right.

Sofia is unhappy with her life—her unfinished dissertation, her job as a barrista, the cubbyhole she lives in, her subservience to her mother. Her father left them when she was five and despite being wealthy, seems to feel no responsibility for them, even in the days when they could barely afford to eat. He has made a religious conversion and now has a young wife and baby daughter.

Sofia is dabbling in an affair with a German girl, Ingrid, from Berlin, but they seem to be at cross purposes.

This novel is intelligent and sometimes almost hallucinogenic as it explores Sofia’s attempts to wake up and take responsibility for herself. At times, I found it a little confusing and its incidents unlikely but mostly I was engaged in Sofia’s journey.

This is another book I read for my Man Booker Prize project.

A Tale for the Time Being