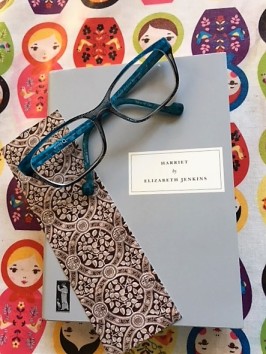 Harriet is a novel written in 1934 based on a true crime that occurred in 1875. As such, it is suitable for the season as well as for the R. I. P. Challenge and the Classics Club Dare.

Harriet is a woman in her 30’s who has her own fortune of £3,000 with prospects of 2,000 more. She is a “natural,” which I take to mean having some sort of mental incapacity. Although her mother, Mrs. Ogilvie, cares about her, she boards her periodically with poorer relatives, allowing them to make a little money and giving herself and her husband a little break from Harriet, who can be difficult.

Mrs. Ogilvy sends Harriet to stay with her cousin, Mrs. Hoppner. Mrs. Hoppner lives with her spoiled daughter, Alice. Visiting her are her older daughter, Elizabeth, and Elizabeth’s husband, Patrick Oman, an artist. Also visiting is Patrick’s brother, Lewis, a clerk. Patrick and Elizabeth are devoted to Lewis.

Although the charismatic Lewis is courting the delicate and beautiful Alice, he turns his attention to Harriet. He is soon engaged to her and marries her despite Mrs. Ogilvie’s objections. In fact, Mrs. Ogilvie tries to get Harriet made a ward of the court to block the marriage, but this backfires when Lewis finds out and tells Harriet she wants to have her committed. Once they are married, Lewis proceeds to strip Harriet of her money and possessions.

After Harriet has a child, he boards her at his brother’s house and moves into a nearby house with Alice. Up until then, Lewis’s actions are marginally legal if morally repellent. It is after this that the behavior of the two brothers and two sisters becomes criminal.

This novel is chilling in its psychological depictions of the two sisters and brothers. Jenkins was fascinated by the case and uses people’s actual Christian names, imaging the thoughts and activities of the characters. This novel was one of the first fictionalizations of a true crime.

The Wicked Boy: The Mystery of a Victorian Child Murderer

The Invention of Murder: How the Victorians Reveled in Death and Detection and Created Modern Crime

The Fall of the House of Walworth: A Tale of Madness and Murder in Gilded Age America

Wilkie Collins’s The Haunted Hotel was the spooky book I read for the Classics Club Dare that will also do for the R.I.P. Challenge.

His family is shocked when Lord Montbarry jilts his gentle cousin, Agnes, and marries the infamous Countess Narona. Agnes herself cannot explain the behavior of the Countess when she meets her in London. The Countess seems horror struck by Agnes and says she will be her undoing.

Lord Montbarry and his new wife go off with her brother, Baron Rivar, to live in Venice. It is not long before the family hears, first, of the disappearance of Ferrari, Lord Montbarry’s courier and the husband of Agnes’s former ladies maid, and then of Lord Montbarry’s death from bronchitis. Lord Montbarry’s fortune is entailed, but he leaves a large life insurance award to his widow. Although the insurance company conducts an investigation into the death, they can find nothing wrong.

Lord Montbarry’s younger brother, Henry Westwick, has been trying to court Agnes, but she is still in love with her former fiancé. In the meantime, he occupies himself with investments, including in the hotel that used to be the villa where his brother died. After the hotel opens, one family member after another stays there, in room 14, all having bad experiences. What happened in that hotel?

Frankly, this short novel has neither the entertaining narratives of The Moonstone nor the intriguing plot of The Woman in White. It is a potboiler, not one of Collins’s best. The hero and heroine aren’t much more than cardboard figures. The only character of interest is Countess Narona herself. The plot is predictable, the novel not scary, and the truth, although creepy, is not told to maximize the effect. On the scary scale, it gets a low mark.