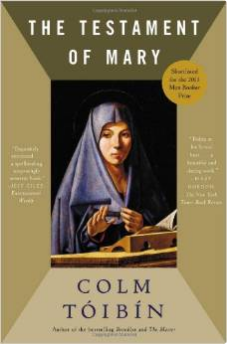 It is years after the crucifixion. Mary is living a quiet life in Ephesus, visited by two of her son’s disciples. It is clear their visits are unwelcome, as they have been trying to force her memories to agree with the documents they’re writing. But Mary has always seen her son’s followers as men with something lacking in them, and she insists on telling her her own truths.

This provocative novella takes the position that Mary was not a believer but was simply trying to save her son from his fate. She grieves his loss and regrets that at the end her courage failed her. While the disciples try to place her and Mary (Toíbín does not name anyone Mary Magdalene, but that is whom he means, I assume) at the grave witnessing a resurrection, they were actually fleeing for their own lives.

While the novella seems to accept some of the miracles, the raising of Lazarus is more of a horror than a wonder. Mary also notices that the jugs of water are brought forward quickly at the wedding at Cana and that only one of them was opened beforehand. Toíbín evokes an atmosphere of feverish excitement and hard fanaticism during these scenes, wherein both Jesus’ enemies and his followers push her son toward his fate.

This novella, which was shortlisted for the Booker Prize, is thought-provoking in its exploration of cult-like origins for Christianity and the shaping of Christian myth after Jesus’ death. As always with Toíbín, it is meticulously and beautifully written.