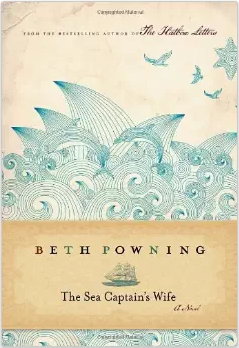 Since she was a little girl, Azuba has wanted to marry a sea captain and leave her home on the Bay of Fundy to live with him at sea. Although such arrangements are not usual, they are also not unheard of. She envisions a life of romance and adventure, traveling to the distant realms of the earth.

This is the life she plans with her suitor Nathaniel Bradstock, but once they are married, he changes his mind. Azuba is bored and discontented at home for years alone and feels he will be a stranger to their daughter Carrie. After a traumatic miscarriage, she decides to insist he take them with him on his next voyage.

In her loneliness, Azuba has befriended the young Reverend Walton. Just before Nathaniel is due to return, carelessness and misjudgment result in a scandal for the two of them. When Nathaniel learns about it, he decides she cannot be trusted home alone and makes immediate plans to leave instead of staying ashore awhile as planned, taking along Azuba and Carrie.

Azuba has got her way, but she is not happy. Aside from the misunderstanding with her husband, she has not realized the dangers and inconveniences of the voyage. To make matters worse, Nathaniel sees her and Carrie as more burdens among the many he must juggle as captain. The terrifying voyage around the Horn is the first in a series of mishaps that endanger them all.

I found this a fascinating book in its knowledge of sea lore and the ports of the time. The main characters are complex, the novel focused on Azuba and Nathaniel’s struggle to design the conditions of their marriage. I have one plot quibble when Mr. Walton reappears in Belgium, where he is studying to be a photographer. After booking Azuba and Carrie on a relatively safe journey home by steamship, Nathaniel suddenly decides to keep them with him. There is no explanation of this decision, and we don’t even see the scene where it is made. It seems awkward, as if Powning made the decision just to further the plot.

Finally, Nathaniel and Azuba don’t actually work out their conflict. Instead, the decision that resolves it is forced on Nathaniel. Still, I found this novel of absorbing interest. But one more quibble. Sometimes stopping to explain what Azuba or other female characters are wearing actually interferes with the story-telling.

Ahab’s Wife: or, The Star-Gazer