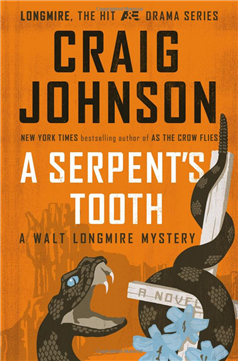 Having caught up with author Craig Johnson in the Walt Longmire series, I was waiting with interest for this next book, which just came out.

Walt is attending a funeral when a batty old lady begins telling him about the angel who lives in her house and does chores for her while she’s out. At first inclined to dismiss what she is saying, Walt stops to listen and decides to go out to her house. There he finds a teenage boy fixing the plumbing. The boy bolts and Walt finds evidence that he has been living in the spring house.

Once Walt is able to locate the boy, he finds out he is Cord Lynear, a fifteen-year-old castoff of a fundamentalist Mormon group called the Apostolic Church of the Lamb of God that has a compound in the county and another one in South Dakota. In his attempts to find Cord’s home, Walt learns that a woman named Sarah Tisdale was looking for the boy at a sheriff’s office in South Dakota and that several men arrived and took the woman away. Walt comes to believe that this woman is one who has been missing for seventeen years, and so his focus changes to finding out what happened to her. The Mormons, however, disclaim all knowledge of her.

The more he looks into it, the more Walt feels that something is going on in their compound, and not anything legal. He is further bemused by the arrival of an old man who states he is Cord’s bodyguard and claims to be Orrin Porter Rockwell, a Mormon hero who would be 200 years old, were he still alive.

Walt is also sensing undercurrents in his relationship with his volatile lover and undersheriff, Vic Moretti. She has stated a desire to go to the homecoming game with him wearing a corsage in the school colors–a request that Walt finds unusual, to say the least. All the activity is preventing him from discussing it with her, however.

This novel is certainly a worthy entry to the series, packed as it is with puzzles, intrigue, and action. My only very slight critique is that some early references in the book made it easy for me to guess what all the skullduggery–that is, the illegal enterprise–was about.