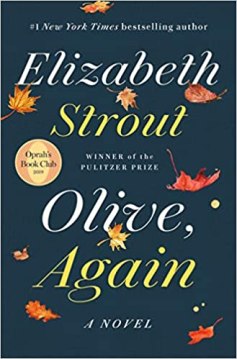 Reading Olive Kitteridge years ago was a revelation to me, first about structure—how Strout could create a novel of a bunch of loosely connected stories—and second about her empathy for her characters, ordinary people in a small Maine town. Finally, there was that force of nature, Olive herself.

Olive, Again is no disappointment. This novel is structured much the same as Olive Kitteridge, stories about Olive and stories in which she is a secondary character or is simply mentioned or thought of. Olive herself is an old woman, who nevertheless toward the beginning of the novel embarks on her second marriage. The novel revisits her difficult relationship with her son, who brings his family for a disastrous visit that gives Olive insight into their relationship as well as that between herself and her first husband, Henry.

Olive is still her straightforward, brusque self, but many of the stories are about troubled people who feel better after encounters with her. Because they live in a small town, people who are the focus of one story appear or are mentioned in the others. For example, in “Helped,” Suzanne Larkin, from a disturbed family, has a heartfelt talk with her father’s lawyer, Bernie, whom Olive meets when she is living in an assisted living facility later in life.

Characters from some of Strout’s other books appear here, too, perhaps more characters than I remembered. Certainly, there are Jim and Bob Burgess from The Burgess Boys, a story about Jim and his wife visiting from New York, as well as Isabelle from Amy and Isabelle, whom Olive befriends in assisted living.

This is another warm and empathetic novel about complex but ordinary people. Strout is a master crafter of a tale.