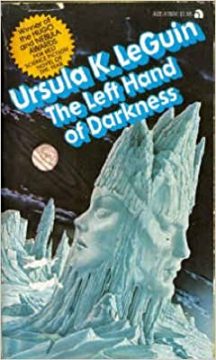 Best of Ten!
Genly Ai, an envoy to Gethen from the Ekumen, a league of other worlds, has been waiting for an audience with King Argaven XV of Karhide for two years. Although he does not trust Lord Estraven, Argaven’s prime minister, he has understood the prime minister was supporting his efforts to gain an audience. But during a state parade, Lord Estraven tells him it is not a good time.

King Argaven encourages Genly to travel around Karhide, and he does so. The planet of Gethen is an ice planet, formerly called Winter by Ekumen, and Genly is constantly cold. He has trouble understanding the Gethenians, who are androgynous; when they are in heat once a month, they take on whichever sex is opposite to that of their partner. Genly has a hard time adjusting to the feminine side of the Gethenians. For their part, they consider him a pervert for always, as they see it, being in heat.

Eventually, Genly decides to leave the more primitive, indirect Karhides for Orgoreyn, an apparently more civilized and direct country, where he is welcomed. This state is much more authoritarian. Whereas in Karhide his presence was known, in Orgoreyn it is being kept secret from all but the government. Soon, the situation takes a turn he doesn’t expect.

When I first read The Left Hand of Darkness years ago, I thought it was about the best book I had ever read. Reading it again, I see no reason to change my mind except to say that others stand up there with it.

It is written as a set of documents, Genly’s story mixed in with records from other envoys and stories from the myths of various cultures on Gethen. It manages to explore many topics with its theme of light and darkness, including the effects on our lives of different sexual orientations. It’s really a masterpiece.

Stranger in a Strange Land