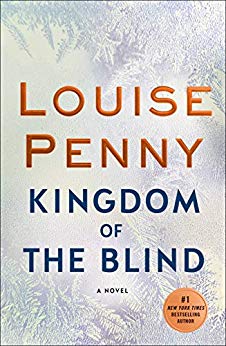 Here’s another review that is suitable for Readers Imbibing Peril!

Although I’ve enjoyed many of Louise Penny’s Armand Gamache series, I had stopped reading them. However, on impulse I picked Kingdom of the Blind up at the library.

Having skipped one book in the series caused a problem, as the last book apparently climaxed in a major event that forced Gamache to allow a new drug onto the street, a killer. Now, Gamache is suspended and under investigation, a familiar situation for him. And that’s one problem for me. Since the beginning of the series, different figures in law enforcement have been out to get him. Each time this plot line seems to be wrapped up, it isn’t. I’m frankly tired of it.

This novel centers on two plot threads, something common to Penny’s books. In one, Gamache is among three people asked to execute the will of a woman they don’t know. Why were they selected, and why has the woman, who worked as a house cleaner, left money and property she doesn’t seem to possess?

The second thread is related to the search for the drugs. It begins when Gamache has one of his proteges, Amelia, dismissed from the police academy for possession of drugs.

It wasn’t very hard to figure out what was going on in one of these plot lines. The other was more difficult.

But really, my problem with this series relates to its sameness, the reason why I almost always quit reading series. First, the same ancillary characters go through the same routines. Second, Penny doesn’t really trust her audience. If someone says half of a well-known phrase, someone else has to finish it. She constantly tells us what to think about exchanges between characters. There’s a certain heaviness to Gamache, whom she depicts as almost like a saint, so that despite some kidding around, everything feels heavy. And anyway, the jokes are always the same.

Finally, there’s the writing style. Penny uses lots of short sentences and sentence fragments in this novel, particularly when hammering home a point that the reader doesn’t really need hammered. I don’t remember her using this style before, but perhaps I just didn’t notice it in the previous books.

This all sounds like I hated the book. I didn’t. I am just tired of the series, as I often become tired of series. This series started out as a really good one, so if you’re interested, I suggest starting at the beginning. Penny almost always links story lines from one book to the next, so it’s best to read them in order.

The Nature of the Beast