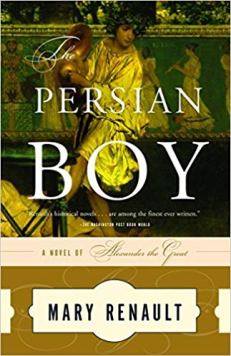 Bagaos, the son of an old Persian family, is ten years old when his family is murdered because his father kept faith with the new king, Arses. Bagaos is sold into slavery and made a eunuch.

Bagaos’s owner rents him out to anyone he wants a favor from, but the news of the boy’s beauty attracts a buyer. Bagaos is being trained for better things and eventually finds himself serving Darius, the new king.

When Bagaos joins the court, Darius has already been defeated once by a Macedonian barbarian named Alexander. So, Darius sends his generals to beat him. Bagaos is grateful for the relatively easy life he leads with Darius but soon finds Darius is no general.

Bagaos must suffer the confusion and savages of war until a Persian general takes him in and then presents him to Alexander as a gift. Bagaos is horrified at the uncouth behavior of the Macedonians, especially toward their king, but he soon finds himself devoted to Alexander.

The Persian Boy is the second book in Mary Renault’s Alexander the Great trilogy. It is faithfully researched and covers some of the many events of Alexander’s life as he conquered the Persian Empire and much of the known parts of Asia. (At the time, the Indian Ocean was considered the edge of the world by the Greeks.)

This is a convincing portrait of Alexander and a character study of Bagaos. Although I felt Renault nailed the psyche of a boy raised as Bagaos was, I did not enjoy this novel as much as the last because of that point of view. During the novel, Bagaos must learn to throw off the effect of the poisonous Persian court.

The Silence of the Girls