As I just reviewed End Games in Bordeaux, the final shortlisted book for 2016 that I read for my Walter Scott Fiction Prize project, it is time for my feature where I decide whether the judges got it right. Since Simon Mawer’s Tightrope was the winner, I’m guessing anyone that follows my blog will know that I don’t think they did.

The Walter Scott Prize judges have done it again by choosing both a sequel and the fourth in a series for their shortlist. I don’t know what it is with this prize. They seem to love books that don’t stand very well alone. Tightrope is the sequel, about Marian Sutro, an agent during World War II who is considered a perfect choice to continue as an agent during the Cold War. In this book, at least, Sutro is an unknowable quantity, and I also thought she was an adolescent male’s dream of the perfect woman. I also wasn’t thrilled to revisit Mawer’s fascination with the female labia. I will not be willingly reading anymore Mawer.

The fourth book of the series was End Games in Bordeaux by Allan Massie, which introduced so many unexplained characters and provided so little background in its terse little chunks that I could hardly understand what was going on. And, I think for this prize, another important consideration is how well the book handles the historical background. Is there a real feel for the time and place? I didn’t think so for either book, although both do a good job of portraying the paranoia of their respective times.

Nineteenth century Australia was better portrayed in Lucy Treloar’s Salt Creek. This novel was an occasionally harrowing picture of a hapless family, appalled by their rustic surroundings. However, I found its plaintive tone a bit hard to take at times.

I liked A Place Called Winter by Patrick Gale better, although it took a long time to get the main character to 19th century Saskatchewan, where it was most interesting. I most liked finding out about the details of early homesteading and the treatment of mental illness. 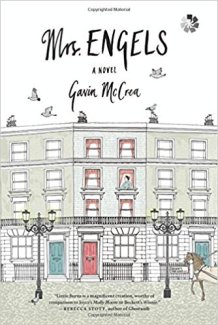 William Boyd takes a more global view in his novels. His most recent ones cover large swaths of time and lots of historical events. That includes Sweet Caress, a novel about the life of a woman photographer, beginning in 1908 and ending in 1975. I found this novel so convincing in one way (it might have been the photographs) that I kept googling the main character, thinking this was a work of biographical fiction. She’s fictional, but I was not always sure I was hearing a female voice.

This decision was difficult, because no one book stands out above the others, although I definitely like some more than others. But I finally selected Mrs. Engels by Gavin McCrea for its lively narrative voice, its humor, and its look into the private lives of Karl Marx and Frederick Engels.

6 thoughts on “If I Gave the Award”