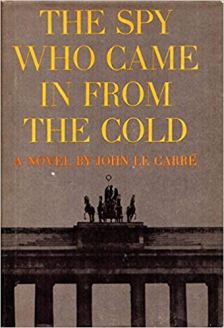 The Spy Who Came in from the Cold was the novel that made John Le Carré’s name as a master of espionage fiction. His introduction to my edition tells just how much he resented the attention he got for it. Even though it is one of his earlier books, having been published in 1963, it is one I hadn’t read.

At the beginning of the novel, Leamas watches in anger from West Berlin as his last good agent, Karl Riemeck, is shot crossing the border from East Berlin. Leamas is fairly sure, on his return to England shortly thereafter, that his career as an operator is over. Instead, he is offered a dangerous last mission. He is to appear to have been retired to a desk job, to go to pieces and lose his position and continue to go downhill with the hopes that he will be approached from the other side. The objective? To take down Mundt, a ruthless official on the other side of the wall and the man responsible for Karl’s death.

All goes according to plan, and Leamas is approached shortly after he gets out of prison for assaulting a grocer. Only, if you are familiar with Le Carré, you know that things will be much more complicated than they seem to be. And Leamas has one weakness. During his descent, he got involved with a young, naïve girl, Liz, a member of the Communist Party.

Le Carré is a master of suspense and a plotter of labyrinthine plots. In addition, his novels always have more going on in them that just action, such as raising serious issues of morality. This novel is rightfully a famous member of its genre.