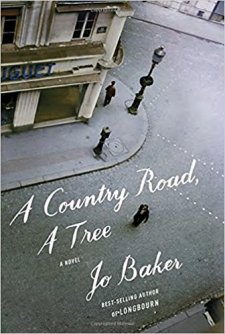 Best of Five!
I know little about Samuel Beckett except that he was Irish, and I have the most basic knowledge of Waiting for Godot and Krapp’s Last Tape. (“A country road, a tree” is his setting for Godot.) So, I would not be able to say whether the novel at all conveys a true sense of what Becket was like. I can say, though, that I’ve read other works of biographical fiction that felt as if they gave a false or poor sense of their main character. A Country Road, A Tree is much more plausible in depicting Beckett.

The novel does not cover his entire life but concentrates on the war years, 1939-1945. Beckett is already a published writer, although probably not to much attention. He is friends with James Joyce and other writers and artists in Paris.

At the beginning of the war, Beckett is in Ireland. He feels stifled there, though, and chooses to return to Paris despite the instability. There he lives an increasingly stressful and straitened existence with his lover, Suzanne. At first, he has no papers, which complicates things when he and Suzanne are forced to evacuate Paris with the German invasion. Later, he decides to work with the French underground, which makes their lives even more precarious. Finally, they must flee to the countryside again.

Although this novel does not concentrate on the literary side of Beckett’s life—in fact, during much of it he is unable to write—it grabs your attention and keeps it. It also provides some insight into the man who produced his later works. I loved Jo Baker’s Longbourne and have been waiting for her to produce a work equal to it. This is that work, which I read for both my Walter Scott Prize and my James Tait Black projects.