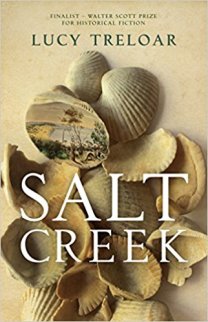 Best of Five!
Ten years after she left Australia in 1862, Hester Finch recollects the seven years her family spent in the Coorong, at Salt Creek, southeast of Adelaide. Her father brought the family there after all of his other business ventures had failed.

Originally from genteel stock, Mrs. Finch is appalled by the rusticity of the station, as are her children. Mrs. Finch, who moved to Australia for the sake of her husband, is depressed and apathetic, so Hester, the oldest girl, must take her place doing the housework and educating the younger children. Mr. Finch considers himself a godly man who must do his duty by bringing the natives to Christianity, so they take in a mixed race boy named Tully.

Life is difficult, and it slowly gets worse. Although Hester falls in love with Charles, a young artist doing a survey of the area with his father, she decides that she will never allow her fate to be determined by another.

As Hester tries to figure out a way to leave Salt Creek without abandoning her younger brothers and sisters, events occur that make the family understand the kind of man their father is.

Some readers may need patience for the beginning of this novel, as it is mostly setting the stage for events to come. I found the plaintive tone of the novel at first a little depressing. However, just before the halfway point, events get going, and the novel becomes absolutely gripping.

Although Treloar states that the novel is based very loosely on her family’s beginnings, the characters in the novel are completely fictional except for four of them. Those characters make up a subplot that involves an actual murder.

I felt the novel lacked descriptions that would give ideas of the appearance of the place (references are made to its beauty, but I was unable to form a mental picture), but the daily existence of the characters is fully realized. This is at times a harrowing read for my Walter Scott Prize project, but it is certainly worth it.

All the Birds, Singing