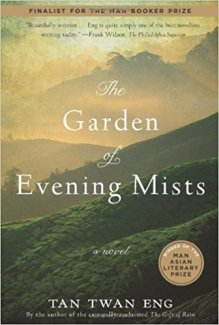 Best of Five!
Yun Ling Teoh, a Malayan federal judge of Chinese descent, has decided to retire early. She has been diagnosed with a neurological ailment that will cause more and more frequent episodes of aphasia and will eventually destroy her language abilities. She decides to return to Yugiri, a Japanese garden in Malaya that she inherited from its creator, Aritomo.

On the advice of her friend Frederik, the owner of a nearby tea plantation, Yun Ling decides to record her memories. She begins in 1951, when she went to Aritomo to ask him to design a garden in memory of her sister, Yun Hong, who died in a Japanese labor camp during World War II. Yun Ling also was in the camp, and her hatred of the Japanese makes it difficult for her to ask for Aritomo’s help. But her sister loved Japanese gardens.

Aritomo refuses her request but makes her a different offer. If she will take on the job of apprentice, he will teach her enough to design her own garden. She decides to accept the offer, having quit her job as prosecutor.

It is a difficult time in Malaya. No sooner did the war end than the government began fighting Communist guerillas, who were attempted to take over the country. And Akitomo has his secrets. He came to Malaya before the war, having resigned as the Japanese emperor’s gardener, but Yun Ling occasionally hears that he played a role for Japan during the war. He had some kind of influence, because he saved his neighbors from the Japanese labor camps. Yun Ling, we find, has her own secrets.

The Garden of Evening Mists is the best kind of historical fiction, immersing me in its time and place while informing me of events I was formerly unaware of. I found it deeply interesting and affecting. The descriptions are delicate and evocative, and the characters feel real yet mysterious. This novel was part of both my Walter Scott Prize and Man Booker Prize projects, as well as the winner of the Man Asian Literary Prize. It is a powerful novel.

The Narrow Road to the Deep North