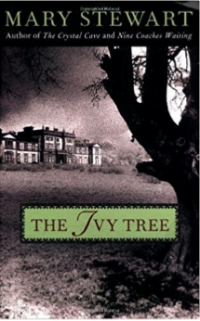 The Ivy Tree is the first book I’m reading for R.I.P.

Mary Grey is a Canadian who has recently moved to Northumberland when she encounters Connor Winslow on the Roman Wall. Connor mistakes her for his long-lost cousin Annabelle and seems so angry to see her that Mary is frightened. She has some difficulty convincing him of his mistake.

Later, Connor’s half-sister Lisa locates Mary at her workplace in Newcastle. Connor and Lisa want Mary to impersonate Annabelle to help insure that Con will inherit the family farm, Whitescar, from his great-uncle Matthew, who is in poor health. If Mary as Annabelle inherits the farm, she will give it to Con in exchange for a small income that will save her from poverty.

Mary agrees to the job because it doesn’t seem as if it will hurt anyone. The only other interested party, Annabelle’s cousin Julie, views the farm simply as a holiday home. But the impersonation may turn out to be more difficult than anticiapted, for Annabelle had her secrets. And Mary has some, too.

I have long been a huge fan of Mary Stewart. Recently, I turned a friend on to her, and our discussions made me eager for a Stewart fix. The Ivy Tree is one of her best, particularly because, on reread, when you understand a secret of the plot, almost every scene in the novel turns out to have a double meaning.

Stewart is known for her convincing characters and her gorgeous descriptions of the setting. This novel is lush with descriptions of the plants and rural geography of Northumbria. It has a great plot and is truly suspenseful. If you have never read anything by Mary Stewart, I can’t recommend her highly enough, particularly those of her novels written before the 1980’s and her Merlin series.

Touch Not the Cat