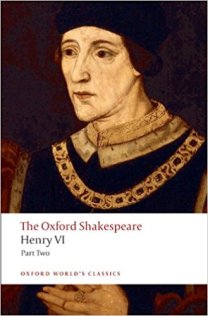 Just by coincidence, I began reading Conn Iggulden’s Wars of the Roses series right around the same time as I started reading these three plays about Henry VI. I found it interesting that Iggulden’s first book, Stormbird, begins almost exactly in the same place as does Henry VI, Part II. Suffolk has brokered Henry’s marriage to Margaret of Anjou, but Henry’s nobles are shocked to learn that the price is to return the provinces of Maine and Anjou to France. Further, the French are not even paying a dowry.

As with Part I, Henry isn’t much of a character in this play, the intent of which is to tell the events of his reign. But whereas he was a child in the first play, this absence in Part II helps to signify his ineffectuality as a ruler. When we see him, he is kindly, but he is unable even to keep his nobles from fighting in his presence.

Besides the struggle for power among the nobles, we are witness to some of the important events in the King’s reign. These include the disgrace of the Duchess of Gloucester and the murder of her husband, the disgrace and murders of Suffolk and Somerset, and Jack Cade’s rebellion.

This play is supposed to be the best of the three Henry VI plays, and apparently Shakespeare’s contemporaries found it exciting because they were unaware of their history. Especially at the beginning, it certainly provides a cogent explanation of the problems of Henry’s realm. Unfortunately, he was not the man to handle them.

The Wars of the Roses