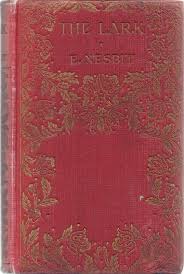 Best Book of the Week!
The Lark was E. Nesbit’s last novel for adults, and it is a delightful romp with lovable characters. I had been reading her books in order, but because of the recommendation of a friend, I skipped to this one. Written in 1922, it is set in post-WW I England.

The novel begins with a few scenes set several years before the main action. Exuberant 15-year-old Jane Quested finds an old book with a spell for seeing her true love, and she is determined to try it in the garden at night. John Rochester has just been advised by his mother to marry the wealthy Hilda Antrobus. (Jane and Rochester. Can this be a coincidence?) John is walking in the woods after missing his train and happens to come upon the scene just after Jane finishes her spell. She thinks she’s seen a vision of her future.

The war intercedes, and Jane and her cousin Lucilla are still in school at the end of it, both of them orphaned. They are surprised to get a sudden summons from their guardian, Arthur Panton. They are delivered to their new home, a small house called Hope Cottage, where they learn that Panton has lost all their money in investments and is leaving the country. He has left them with the house and 500 pounds.

Instead of being discouraged, Jane declares that they will live life as a lark, and the first thing to do is find a way to make money. Unfortunately, they don’t know how to do anything.

One morning Jane hands out flowers to the workmen on their way to work. One of them suggests she sell the flowers. So, she and Lucilla begin selling flowers out of their garden but soon find the garden isn’t big enough. The next thing to do is to find a place that is.

Of course, John Rochester appears on the scene, as the nephew of the man whose house they want to lease. But Jane is determined not to be side-tracked by a vision from making her own way in life.

This novel is lively and full of enjoyable characters, as Jane and Lucilla attempt to earn their living and so meet all kinds of interesting people. It is a light-hearted novel that I enjoyed immensely.

At the suggestion of my friend Deb, I’m attaching a link for The Lark online, since it is difficult to find: http://dbooks.bodleian.ox.ac.uk/books/PDFs/N10292048.pdf. I myself bought E. Nesbit’s complete works from Delphi Classics, also in the form of an ebook (the only disadvantage, in my opinion). If you live in the U. K., it looks like there are some newly printed paperback copies available.

The Story of the Treasure Seekers

The Making of a Marchioness