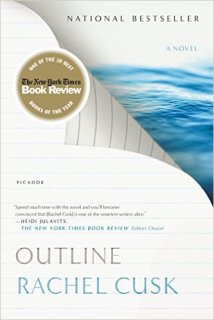 It was hard for me to decide what I thought of Rachel Cusk’s novel, Outline. It is a difficult novel to describe and seems to be an experiment in fiction. It consists of a series of dialogues where most of the time only one side of the conversation is reported.

The almost unnamed narrator, Faye, is a writer on her way to Athens to teach a writing class. Something about her encourages the people she meets to tell her their stories. The narrator herself seems to be exploring the possibilities of passivity so that she doesn’t herself do or say much; instead, things happen to her. But not much, and that isn’t the point.

The characters’ monologues are written as little gems—sparely expressed and containing interesting intellectual ideas. But there are too many of them for me now to remember which concepts struck me. The overall effect is very cerebral, even though some of the characters express strong emotions.

I am not generally fond of monologues. It was hard for me to tell whether we are to assume that the narrator seldom speaks or whether, as one reviewer assumed, her part of the dialogue has been excised. In addition, the monologues are not written as speech but mostly as narrative, lending even more inertness to the work. I remember going to a play called “Danton’s Death” where instead of talking to each other, the characters took turns declaiming. The effect to me was a series of rants. This novel doesn’t have that effect because of the narrative. I was interested in the characters’ stories, but I wasn’t moved by them.

My Name is Lucy Barton