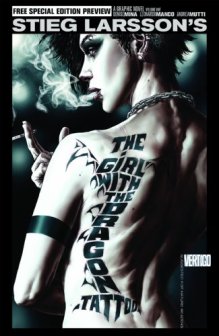 A while back I read the third book in the graphic novel series based on Stieg Larsson’s Millenium Series. I found myself a little confused because it had been so long since I read the original books. So, I decided to get the other two.

Of the three original novels, The Girl with the Dragon Tattoo works best as a stand-alone. We meet the two protagonists. Mikael Blomkvist is a journalist who has just been found guilty of slandering a powerful businessman, Wennerström, and must face a jail sentence. Lisbeth Salander, the eponymous heroine, has found some evidence that Wennerström is actually guilty and has led Blomkvist on to make allegations he suddenly finds he can’t support so as to ruin him and his magazine.

Blomkvist quits his job on the magazine to save it, but he is offered investigative work by Henrik Vanger, another powerful industrialist. Forty years ago, Vanger’s niece Harriet disappeared during a get-together on the family island and was never found. Henrik assumes that someone in the family killed her, since no one could get on or off the island at the time. In exchange for Mikael’s help, Vanger promises to turn over the goods on Wennerström.

This graphic novel was easy to follow and beautifully illustrated. I find that the genre doesn’t allow for the extreme build-up of suspense that Larsson was able to create in the novels. It could be my imagination, but I also thought some scenes were moved around and the ending was slightly different than the book. I also felt that Lisbeth’s role in the graphic novel was minimized as compared to the novel. Her scenes are more likely to be visual rather than to have dialogues and so go more quickly. Still, this is a rendition of the story that has much to offer.

The Girl Who Kicked the Hornet’s Nest

The End of the Wasp Season