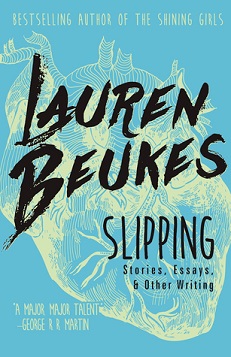 I have read two novels by Lauren Beukes and greatly enjoyed their mashup of crime fiction and science fiction. So, I thought I’d love Slipping, a collection of short stories, essays, and other writings.

Beukes’s writing is energetic and her ideas unusual, often gruesome. Her stories are often bizarre. But, oddly enough, after a while they seemed to be very similar. Most of them are set in South Africa in what appears to be the near future, although some are set on other planets. Many are violent; many have characters leading glitzy but vapid lives. They feature a lot of slang that may be invented. There is a glossary, but I didn’t notice it until it was too late.

“Muse” is a short poem about the difficulty of writing, in which the writer receives gloves made of “muse skin” with barbed hooks in the fingertips.

“Slipping” is about athletes who are artificially enhanced competing in a race. One of them is even a dead body. “Confirm/Ignore” is about catfishing. “Branded” offers advertizers a brand new idea for sponsorship. “Smileys” is a dystopian tale about a street vendor defending herself against extortion. “Princess” puts a startling interpretation on the story of the princess and the pea.

I don’t know why I felt this sameness, as the stories are obviously varied in nature, but I found myself not wanting to read more. I think some of the images were just to grotesque for me.