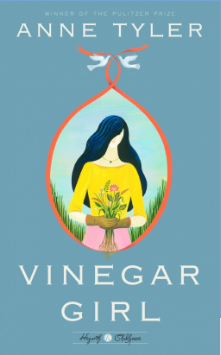 When I realized that Vinegar Girl is a reworking of The Taming of the Shrew, my main reaction was to wonder how that could be pulled off in modern times. But, I have thought I should read more Anne Tyler, so I decided to read it. It is very short and perhaps predictable, a quick, light read.

Kate Battista feels she doesn’t have much purpose in life. She and her sister Bunny have been raised by a preoccupied scientist father who has loads of ridiculous systems for running the house (even worse than my husband’s). The girls’ mother died young, but before that she was almost always caught up in depression. Kate was expelled from college for being rude to one of her professors (which actually sounds like an unlikely reason for being expelled). Since then, she has been working as a preschool teacher, taking care of the house and garden, and being a guardian to her sister.

Kate is abrasive sometimes, and she keeps getting into trouble at the preschool for things she says to the parents. She thinks her beautiful young sister is silly for putting on a different personality for men. She has lost most of her friends through lack of shared interests, and the only thing she does that she likes is gardening.

She is taken aback when her father calls her asking her to bring him his lunch, which he has forgotten. Since he frequently forgets his lunch and never notices, that is surprising, but she doesn’t figure out that he is attempting to introduce her to his lab assistant, Pyotr Cherbakov. Ultimately, it comes out that Pyotr’s visa is about to expire, and her father wants her to marry Pyotr so that he can stay in the country.

Kate is insulted and infuriated at the same time. She is so angry that she ends up agreeing, just to get out of the house.

You can see where this is going. The novel is a cute romance with some good dialogue. I found a little unlikely the climactic scene Kate makes at the wedding dinner, especially considering what had just gone on before. The thrust of her message is that it’s harder being a man than a woman, something my mother used to tell me that I have never bought. I think Tyler is showing her age here, but it’s the only disappointing thing in a book that is fairly entertaining.